Another American joined us late yesterday evening. He’d been with us the night before and is a nice guy but a bit clueless. Generally one of those guys who’s way over prepared (he has a massive pack) but yet stuff always seems to happen to him. Anyway he set up his tent practically on top of ours last night and then decided to get up at 4am to pack everything up. He took at least an hour to pack all his stuff away and had a giant headlight swinging around the whole time. It started raining shortly after and when we got up around 7 he was still at the campsite just inside the the shelter. Apparently he’d decided to pack up all his stuff before it got wet (and heavier). We got on with our normal routine and by the time we were leaving at 8 he was suspiciously also about ready to leave. We quickly said that we’d see him later and hustled out of the campsite. We’re not sure if we’ll see him again tonight as we’ve pushed quite far today and he had previously asked me if we’d be taking a zero day because of the morning showers.

Knowing we had 14km on the road to start we dressed in full rain gear and got going. The road was pretty boring as usual and we couldn’t see a lot with the cloud coverage. We did get a number of cyclists pass us, but we’re still not sure where they’re going as the road dead ended into our track and we never saw them again. 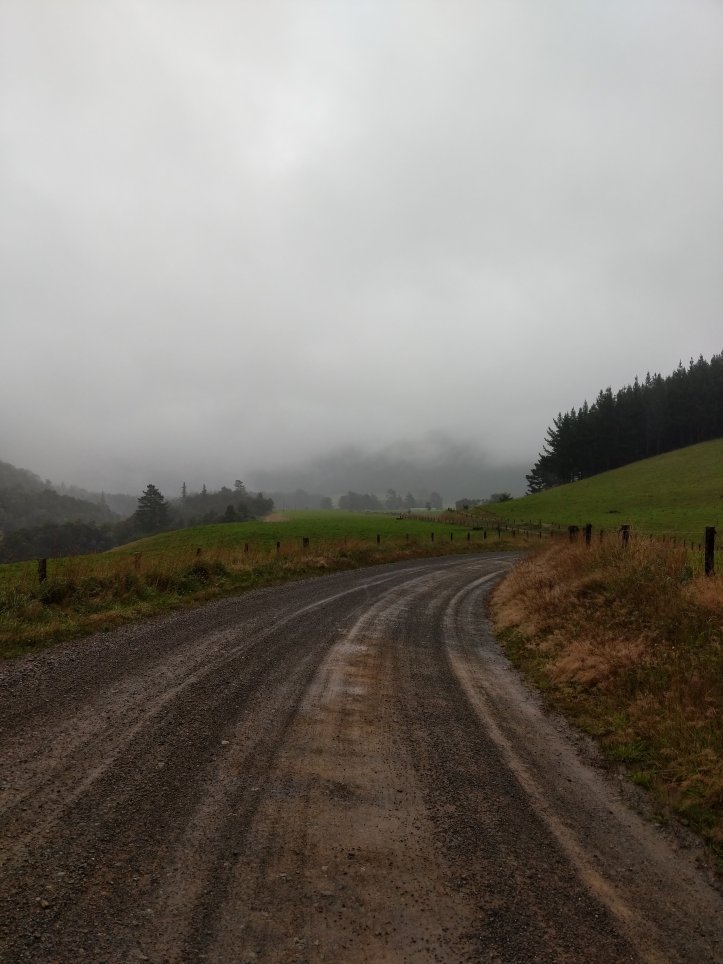 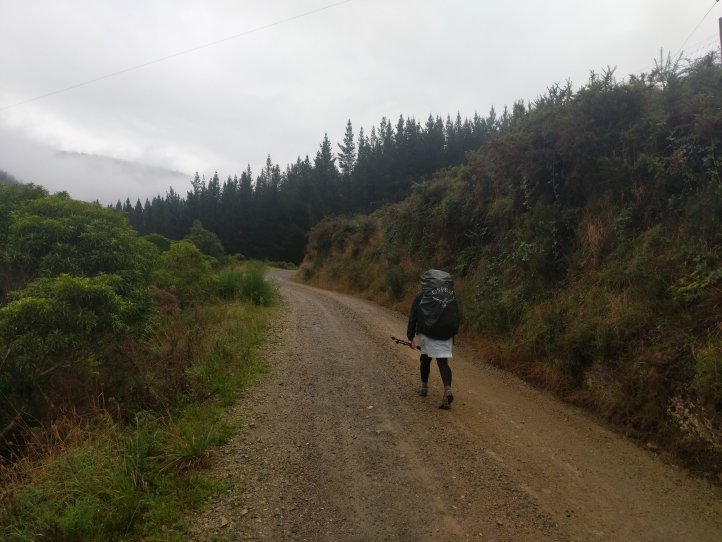 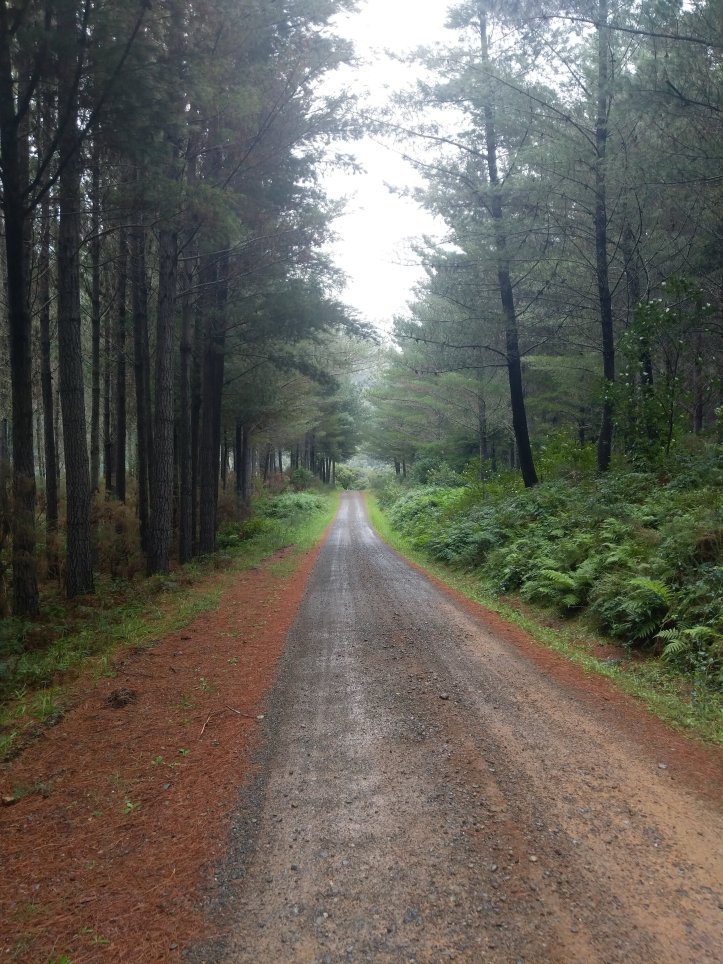 We went straight onto the start of the track with an anticipated four hours to the first hut where we would lunch. It was about 11am already so we were hoping to make up some time. The track wasn’t to bad, even in the rain. It was mostly siddling along next to an amazingly blue river that looked like it would’ve been great to swim in if it had been warm out. We were able to make up some time and made it to the hut around 1:30pm for a classic tuna wrap lunch. 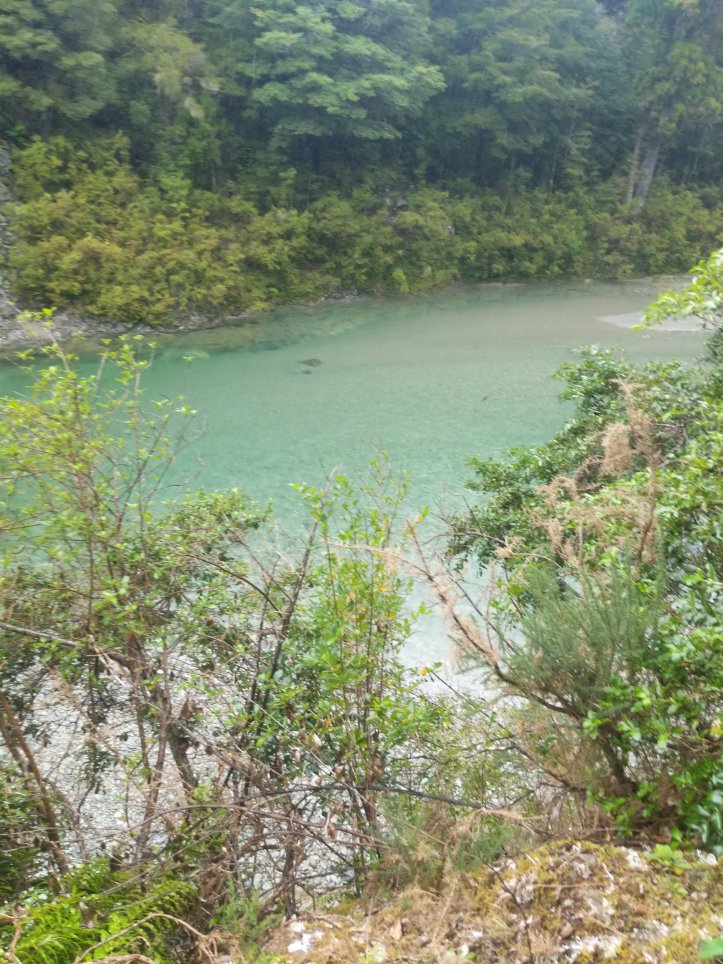 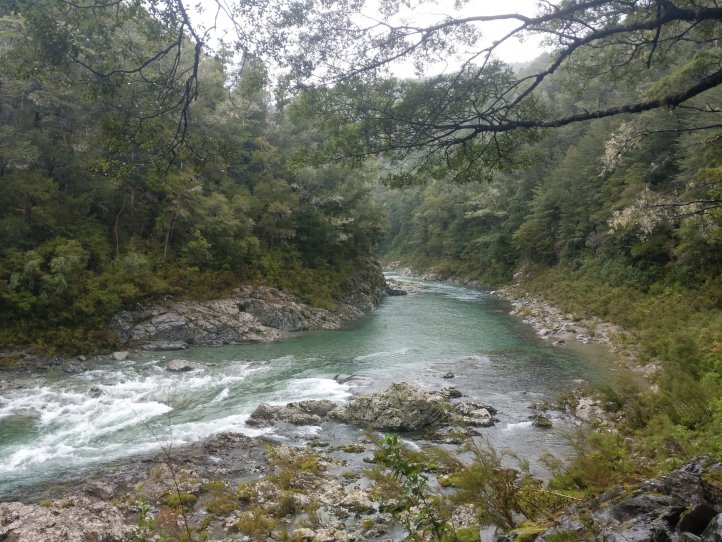 The track continued on similarly after lunch, there was another hut about 2 hours on but we wanted to make it to a third hut an additional 3 hours beyond that since we were moving fast. The track was fine but we did start to encounter a lot of shaky swing bridges. We crossed at least half a dozen that had warning signs to cross one at a time. We just had to hope that one person included carrying 8 days worth of food. 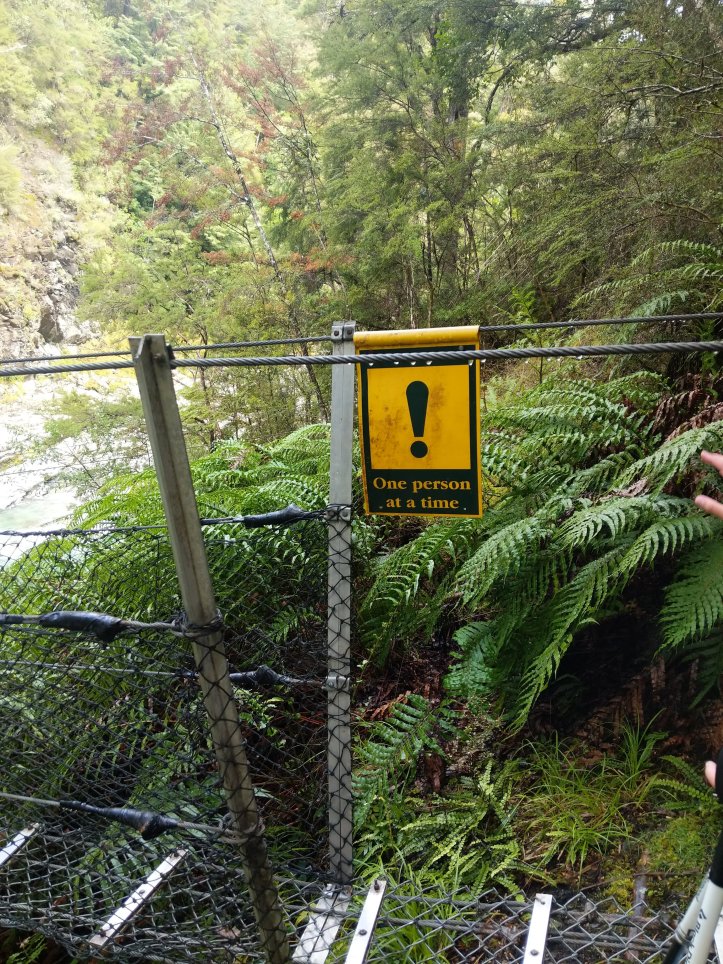 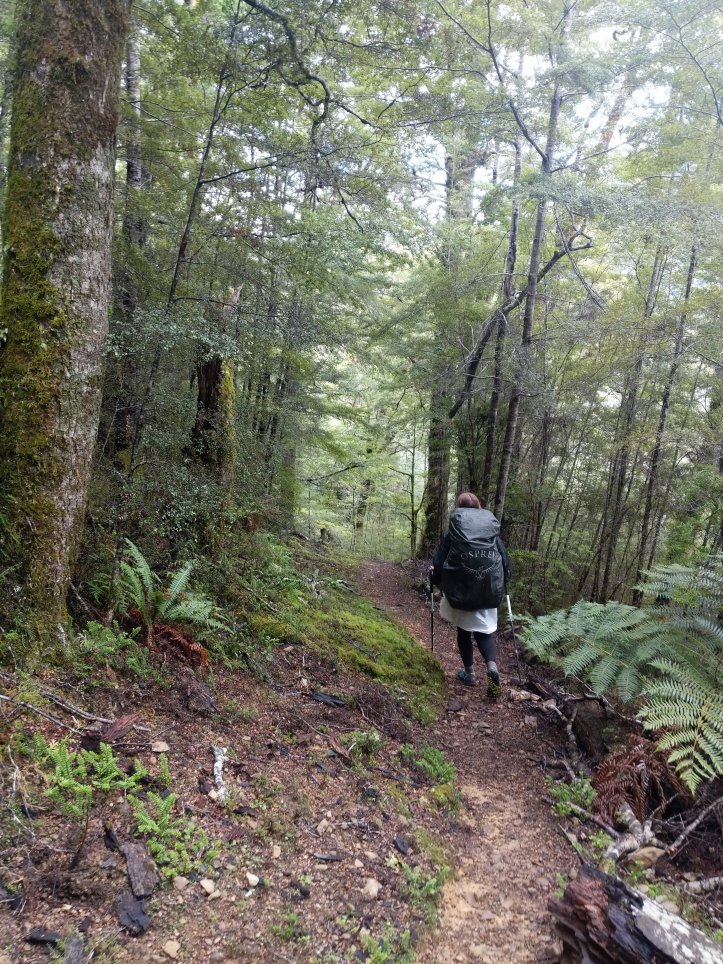 As we reached the second hut the sun came out and the skies cleared. We stopped to have a quick snack and take off our rain gear but found ourselves moving on quickly as we were swamped with sandflies. We’ve been warned about these on the South Island but am a little upset that we got so swamped so quickly. There was a lady staying in the hut who even yelled (gently) at Heather to close the door and not let any in. 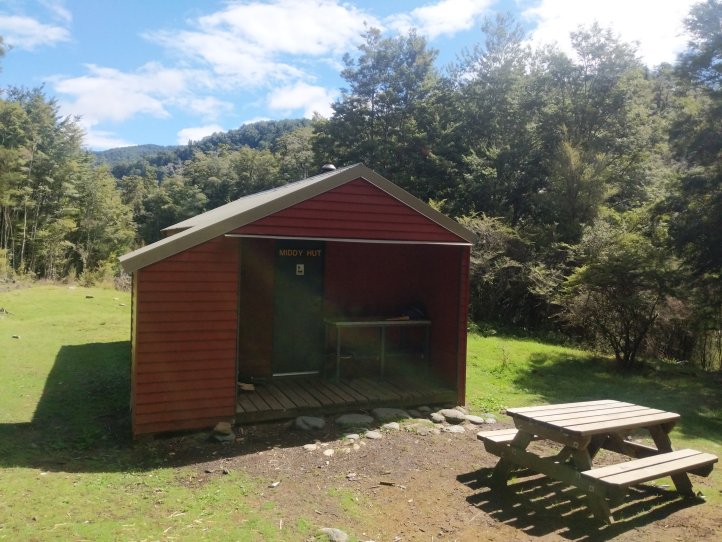 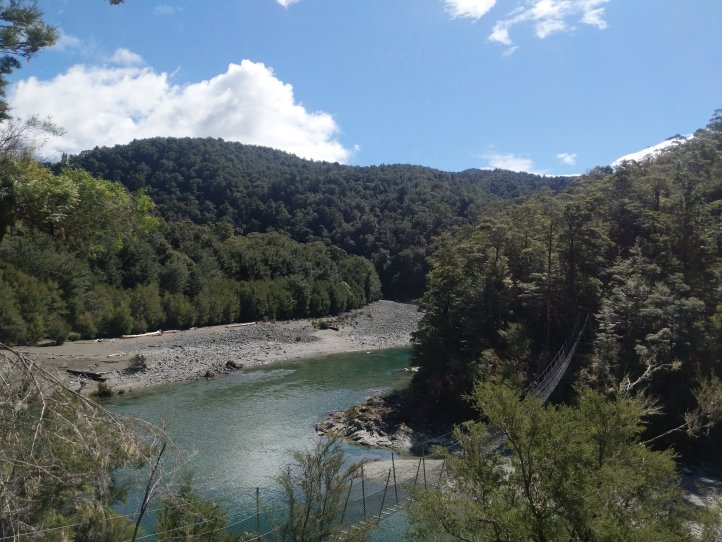 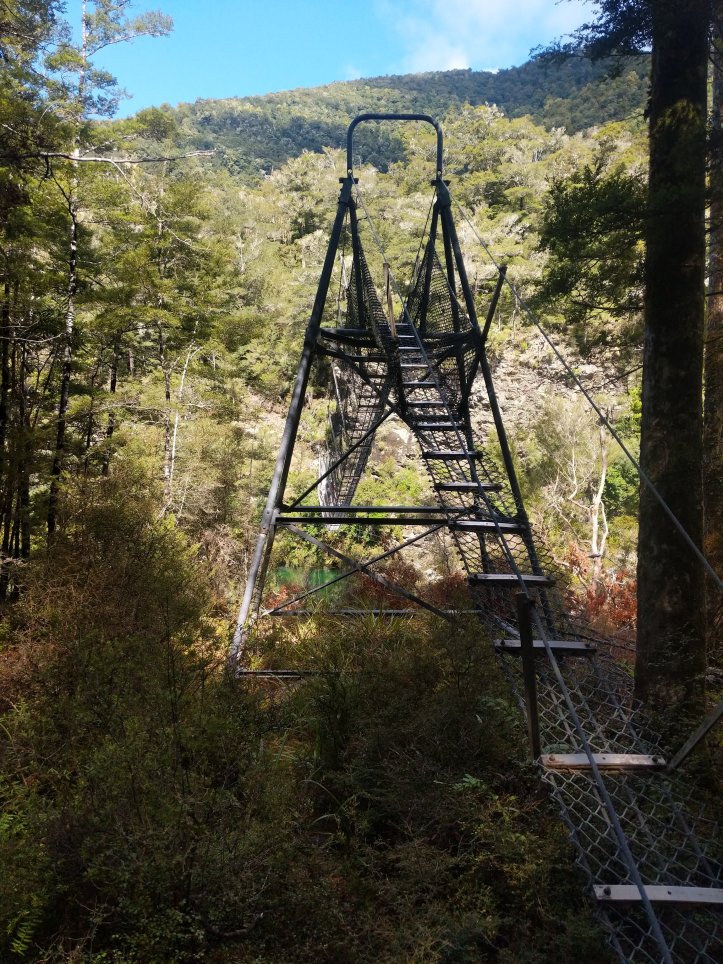 After crossing a final swing bridge we began to climb to the final hut where we would stay. It was a steady and steep climb and we were feeling our push day pretty hard by now. We did reach the hut by 6pm with plenty of time to unwind and came across a few others, including two TA section hikers, who we’ve been chatting with. We also saw that the two Americans from near the start of the North Island are only 3 days ahead (they’ll soon be more), and there’s another group we’ve been following in the books only a day ahead. So we may eventually meet them in the near future. We have a nice clear sky with a great view of Mt. Richmond for the night.