We finally managed to drag ourselves out of Wanaka today. We’re estimating that we have about two weeks walking from here to Bluff which is pretty exciting. Two weeks is still a decent amount of time and they’ll be plenty of challenges so we’ll see. We set off around 830 after a casual morning beginning with the remainder of the walk into Wanaka Central. It was an easy walk and I was feeling pretty refreshed after two days off and with a lighter pack. It’s only a three and a half day carry to Queenstown. We also have what is hopefully our final pair of new shoes for the trail, our fourth pair each. 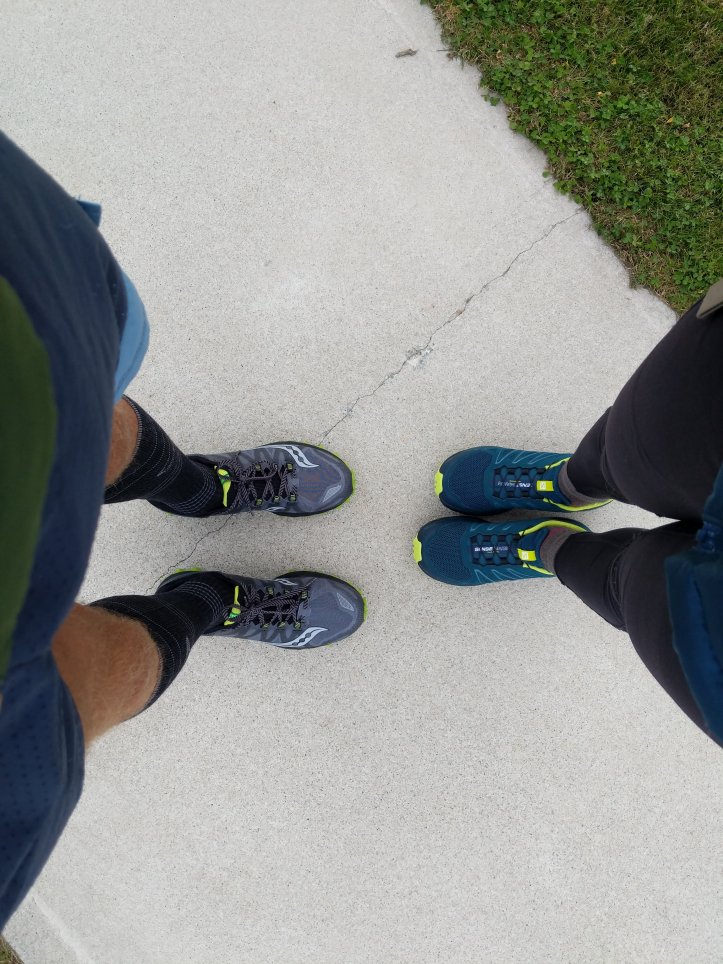 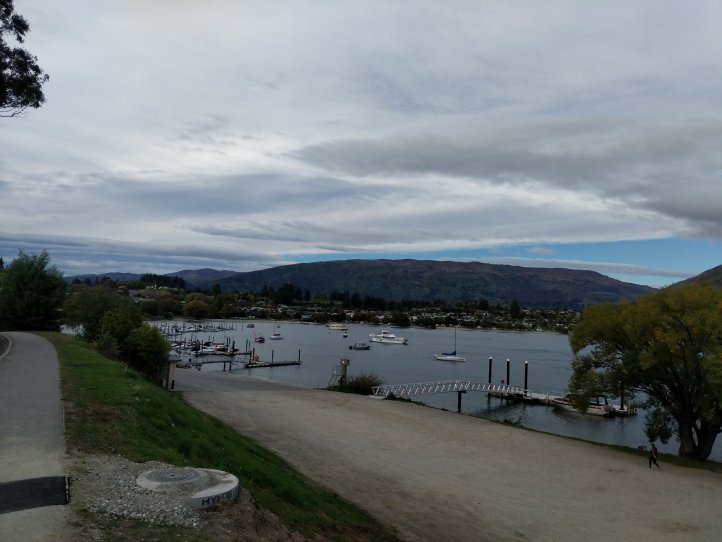 We continued walking around the lake past town and out towards Roy’s peak and Glendhu Bay. There were a lot of people out on this area with it being Easter Monday. A strong mix of tourists, runners, and bikers. The trail was practically flat with some small undulations and a nice easy gravel base. We passed by the Wanaka tree on our way out as well. 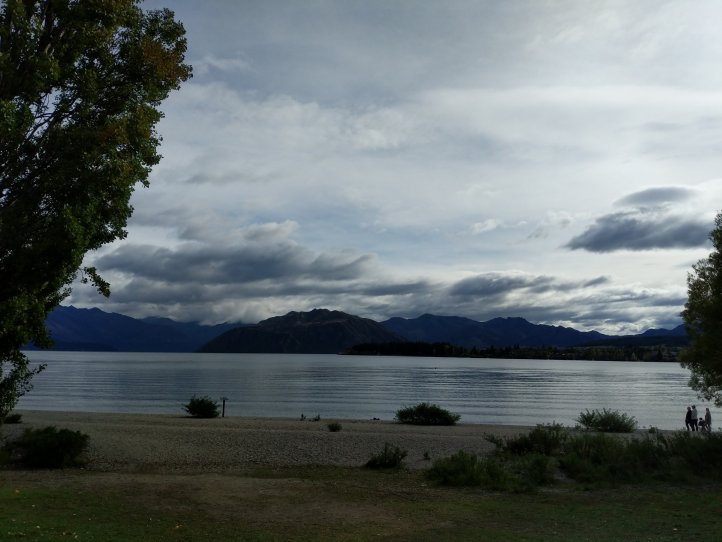 It was a very picturesque route and with the exception of a few bikes we quickly became the only walkers out there. It gave a good view of how large Lake Wanaka actually is. 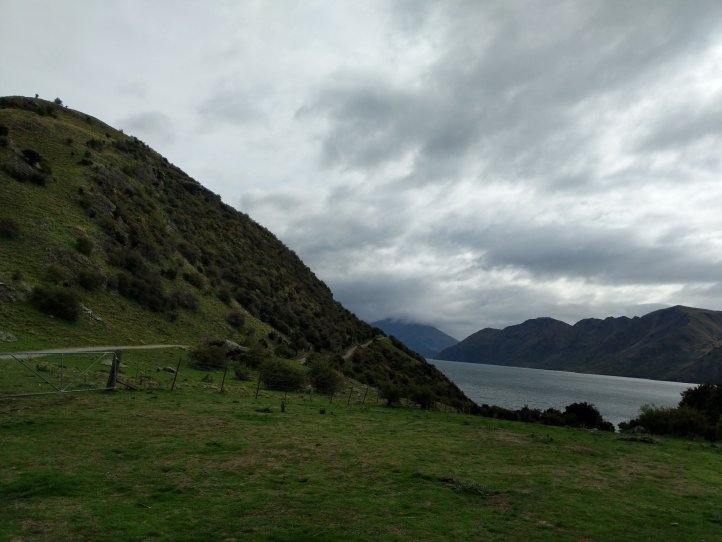 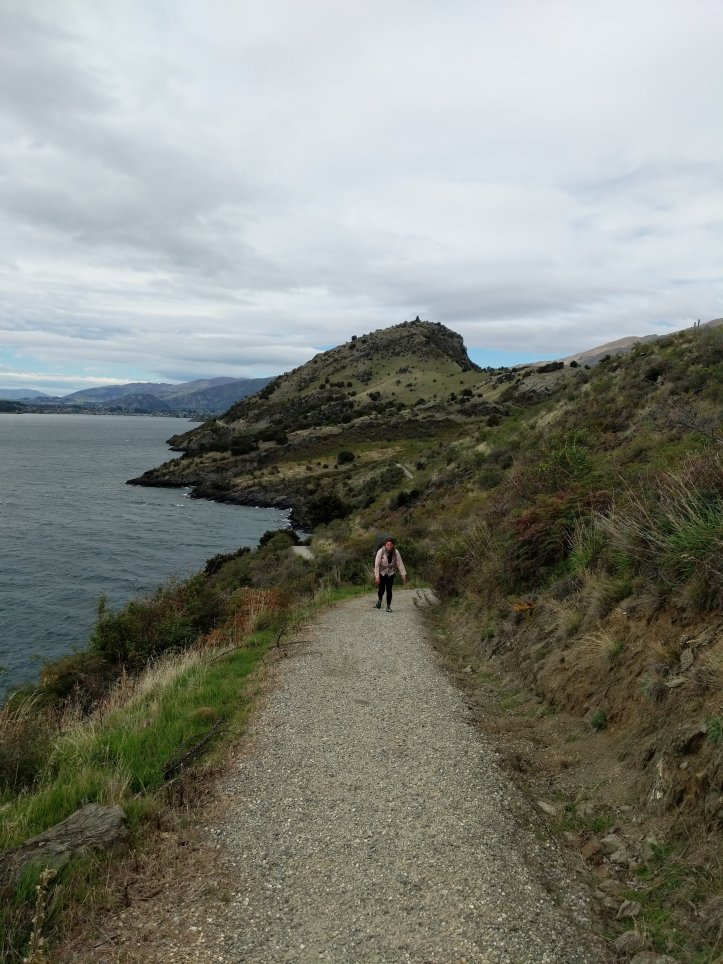 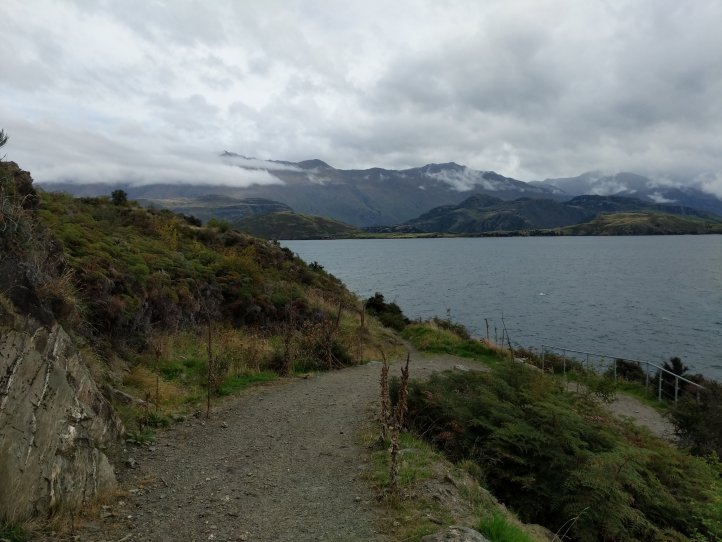 Annoyingly the rain kept starting and stopping and we found ourselves constantly putting on our rain gear in the wet and then taking it off five minutes later as the sun would be out and we’d be sweating again. Making good use of the benches while we have them we stopped for lunch and enjoyed getting back to our traditional tuna wrap with cheese (the cheese is now an essential staple in the wraps). The track took us through a holiday park and then onto road for a few kms before hitting the start of the Motatapu track. 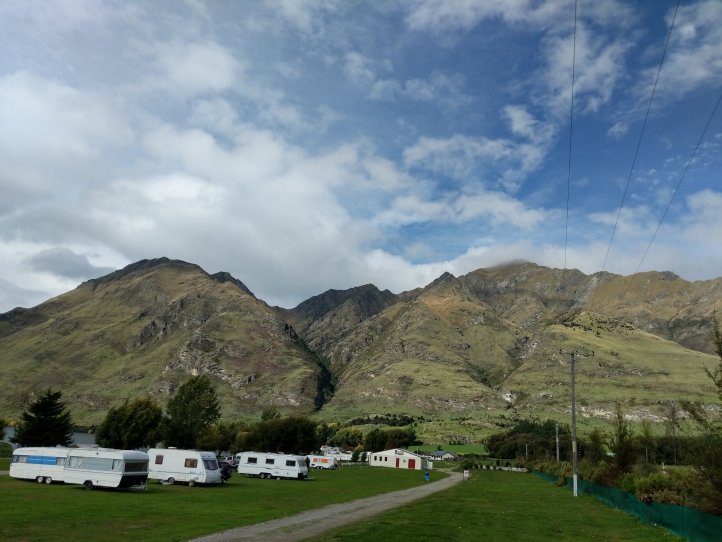 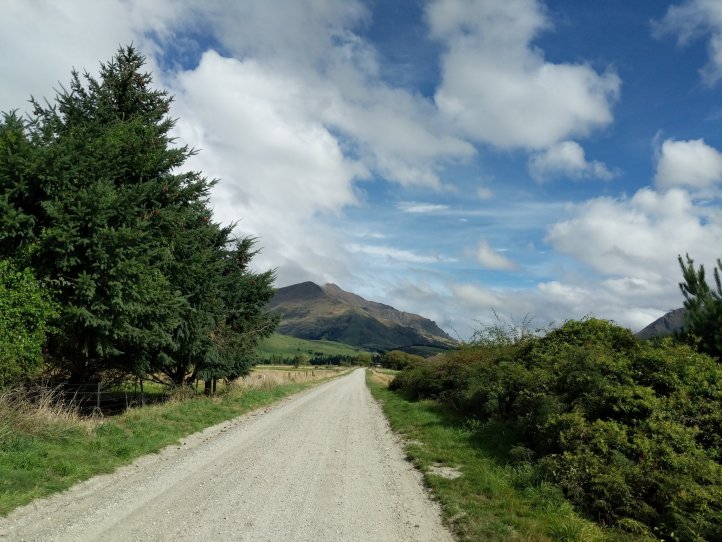 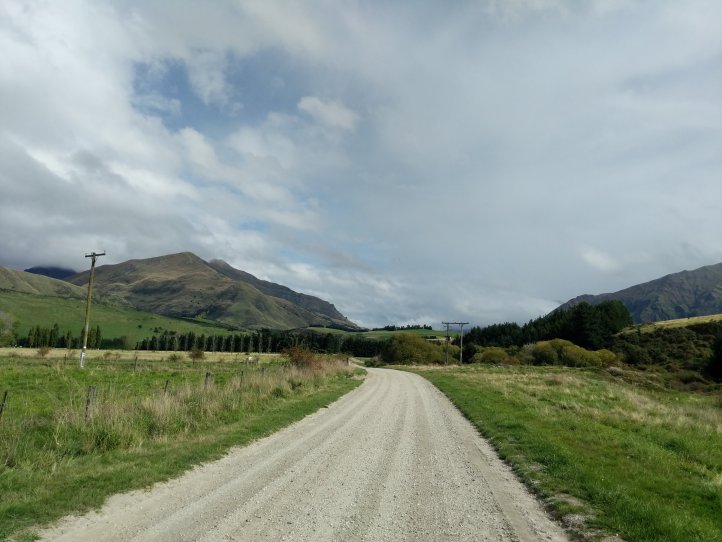 The track started off by immediately dunking our feet in water. There was a stream that followed along next to the track but at the start it had decided to become the track. New shoes nice and wet. Ironically slightly further up there was a bridge over the same stream. 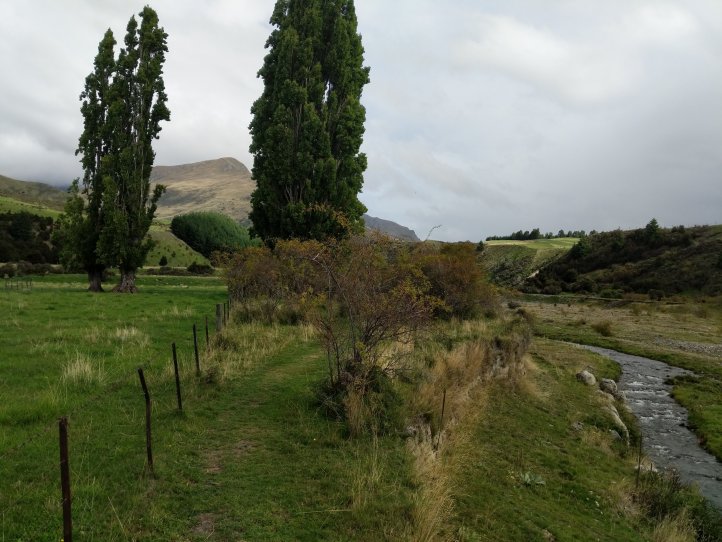 The track followed along private farmland for a while before going through the strangest gate we’ve seen so far and entering DOC forest land. 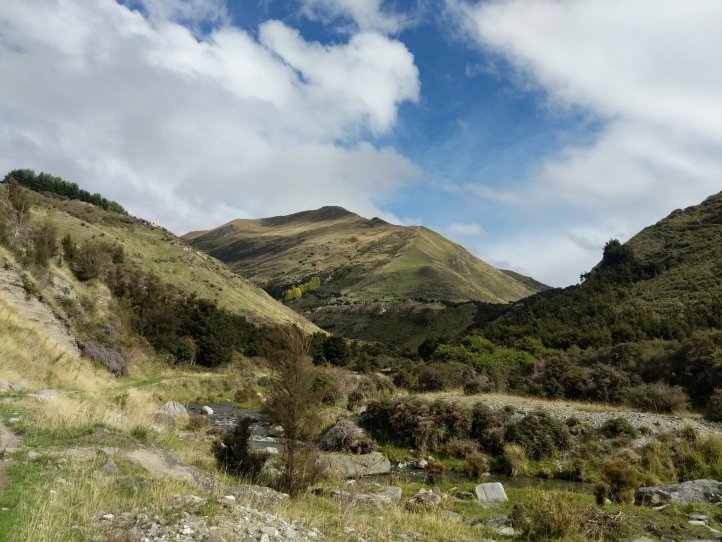 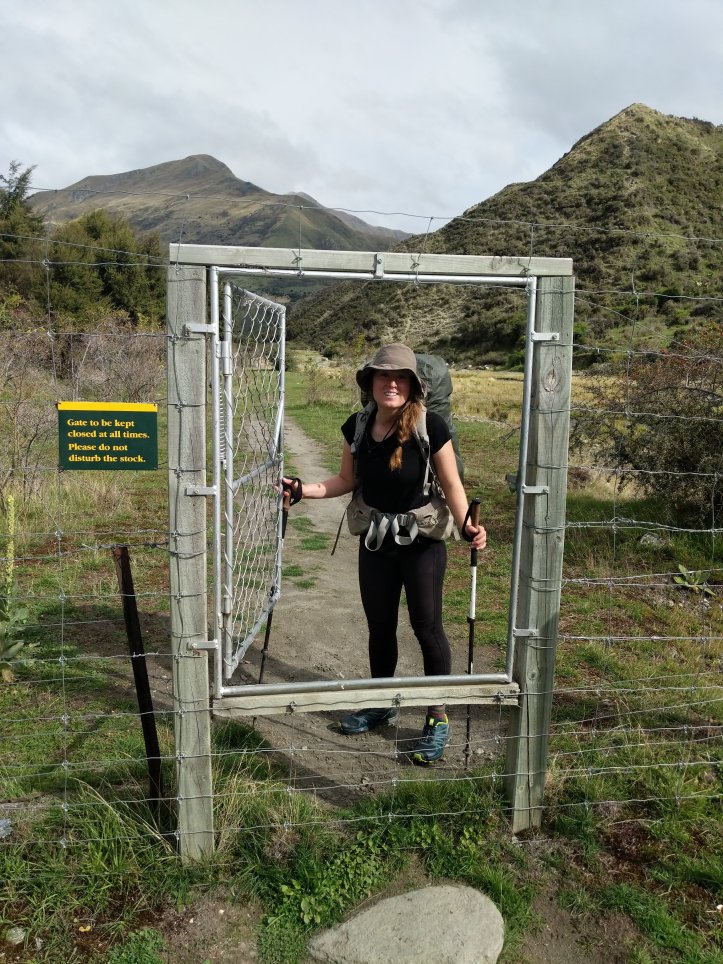 The forest was nice but we also started to climb at this point and the trail was very up and down alongside a river. Thankfully with our new shoes there was no slipping.

We popped out of the forest onto tussock country and completed another few kms at the top of the valley before reaching the hut. It was a steep gradient but a very nice track, obviously pretty well used. Approaching the hut we were level with it for about 400m but then the last 100m makes you climb down and back up a gorge that can’t be seen until the last minute. Never an easy walk into the hut. 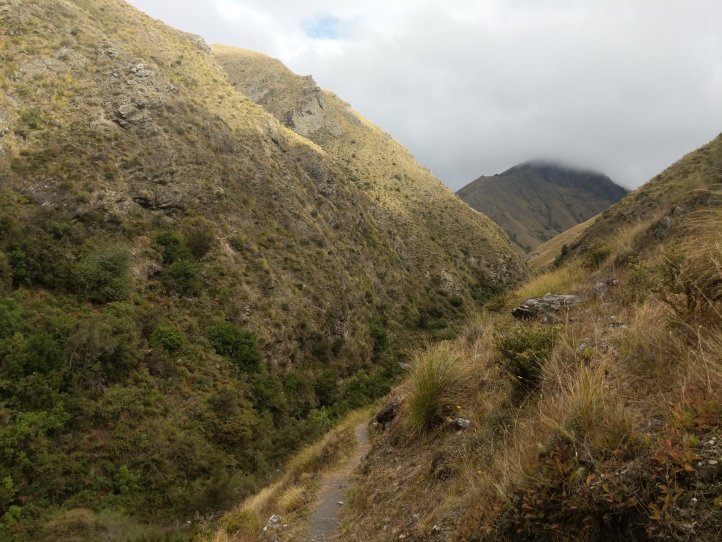 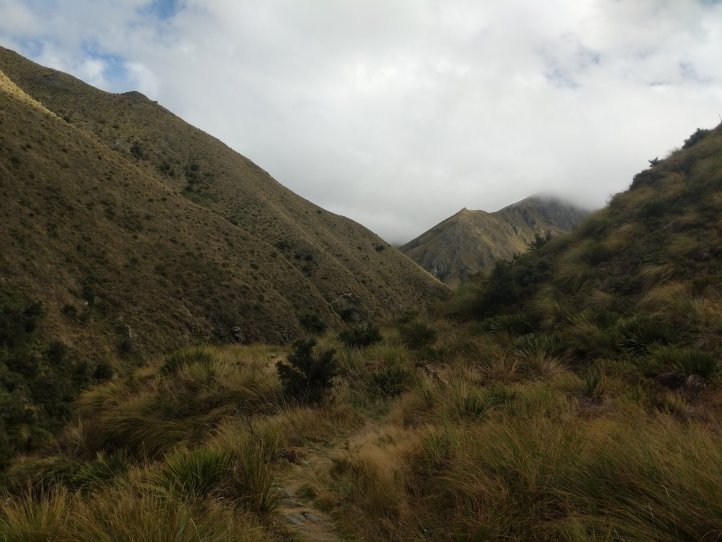 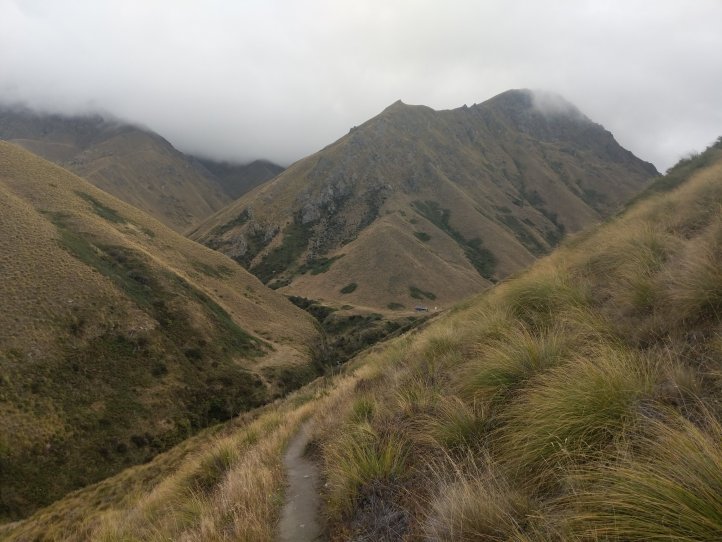 The hut is nice but very packed and there’s even some people camping outside. I don’t think we’ve slept in a hut this close to capacity so far. Most of these people seem to be just doing an overnight trip though so tomorrow might be less people. Seperately, Heather also wanted me to mention that she got stung by a wasp (maybe a bee, definitely not a yellow jacket) on our way into Wanaka the other day and that while this was traumatic she pushed through and is able to continue hiking…