We had a nice early start given that we were just prepping everything inside. After a yum breakfast of heated croissants we set off towards Lake Pukaki as the sun was just coming up. 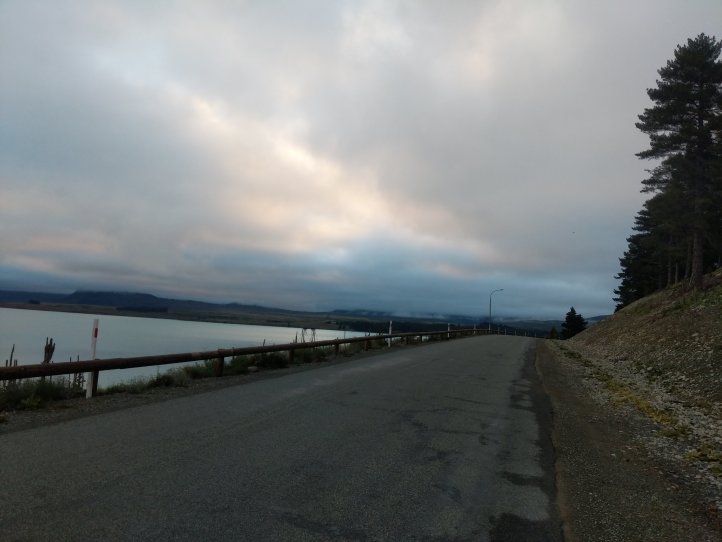 It was a fairly straightforward but long day and we needed to cover over 40+km to get to a spot where we could camp. Thankfully the weather looked like it was going to be about perfect with good cloud coverage but no rain or wind. The track wound out of town and quickly descended through a patch of pine trees to the start of the Tekapo canal. The canal was a ridiculous color blue, even without any sun shining on it. The start had a cool power station as well that I was pretty excited about. 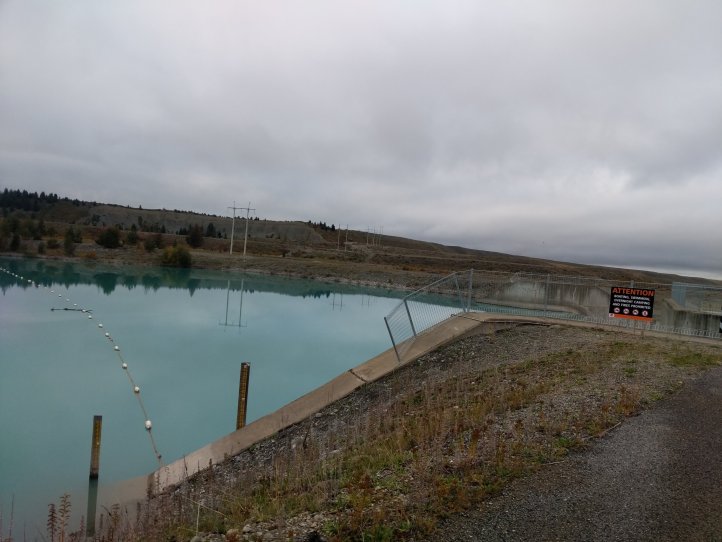 90% of the day was spent walking along the canal and a lot of it was really really straight stretches. We had service so we even did some Skype calls while walking to help pass the time. The ridiculous blue of the canal did keep us entertained. We spent a lot of time discussing if we would’ve been more bored had the canal been a regular color. 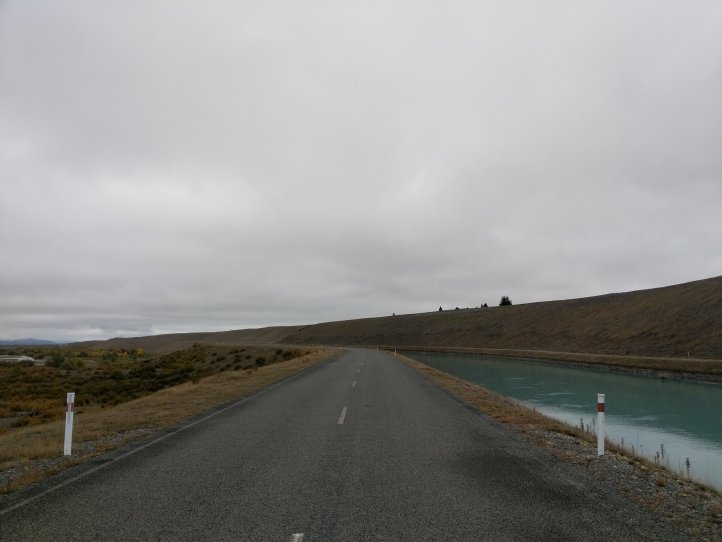 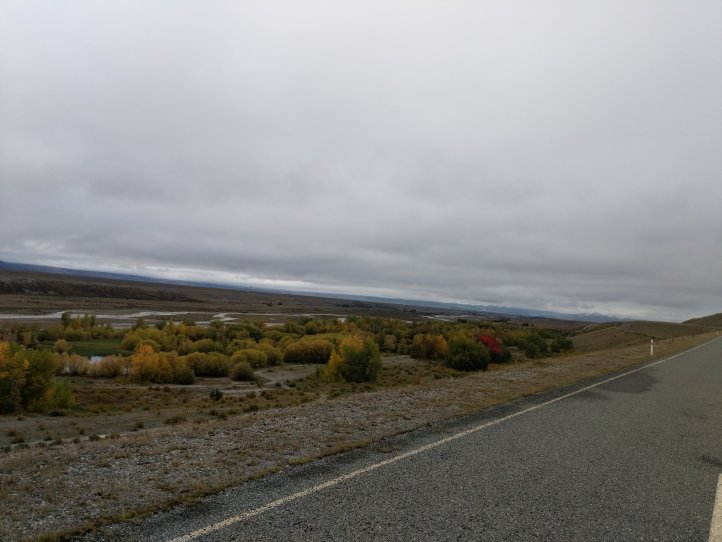 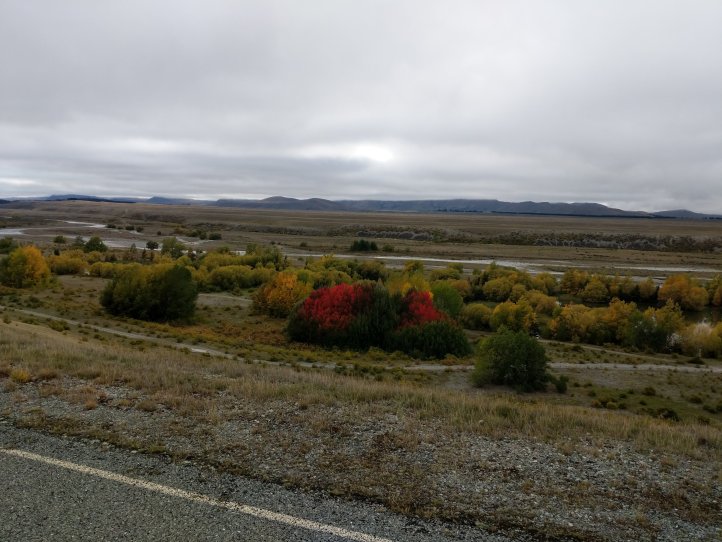 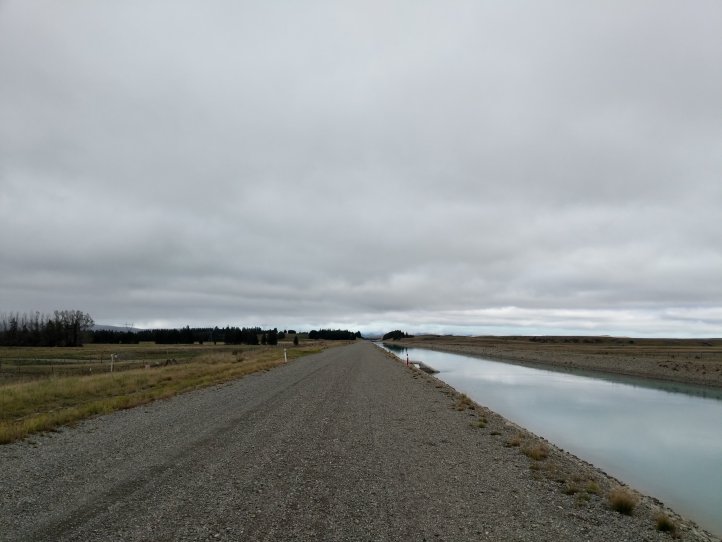 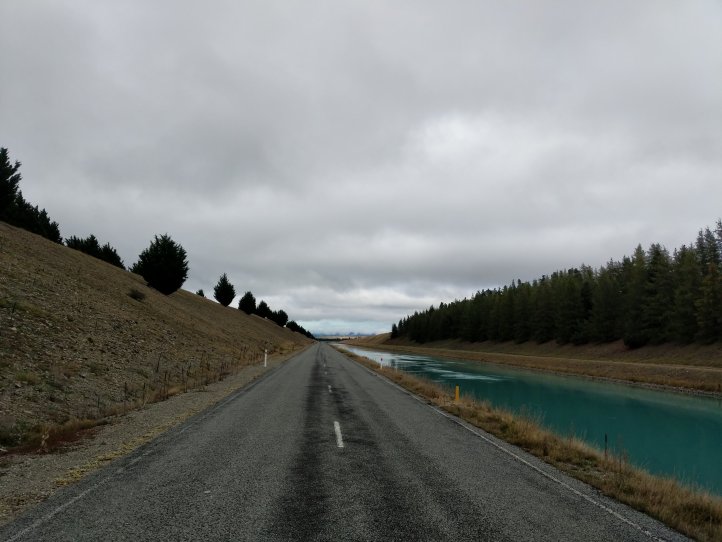 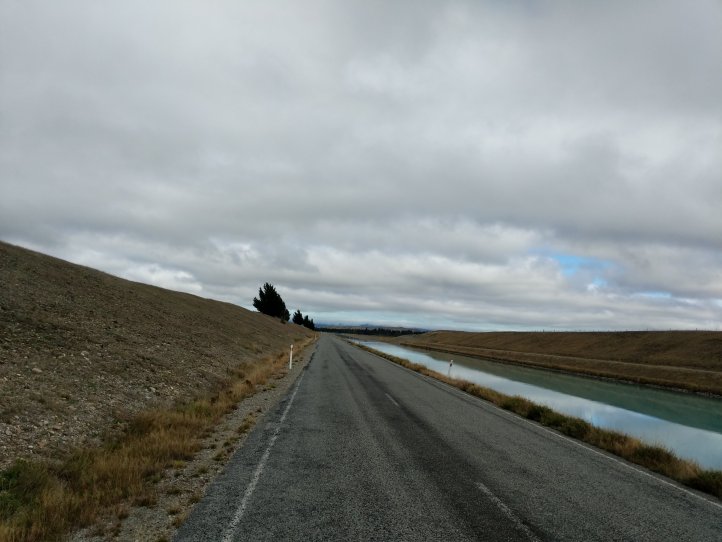 We’re starting to notice that the trees are turning now too. This should be obvious that the seasons are changing given the blizzard we survived but actually seeing the trees changing color was a reminder that it’ll be getting and staying much colder soon. We passed over the highway just before lunch. Along this stretch we could hear a booming noise going on, this was either avalanche clearing or military operations. Probably the latter as we’d seen a large amount of military in the area (just a Humvee really, but that’s probably large for the New Zealand military…). We stopped for lunch on a rock we found and enjoyed fresh sandwiches and crisps! 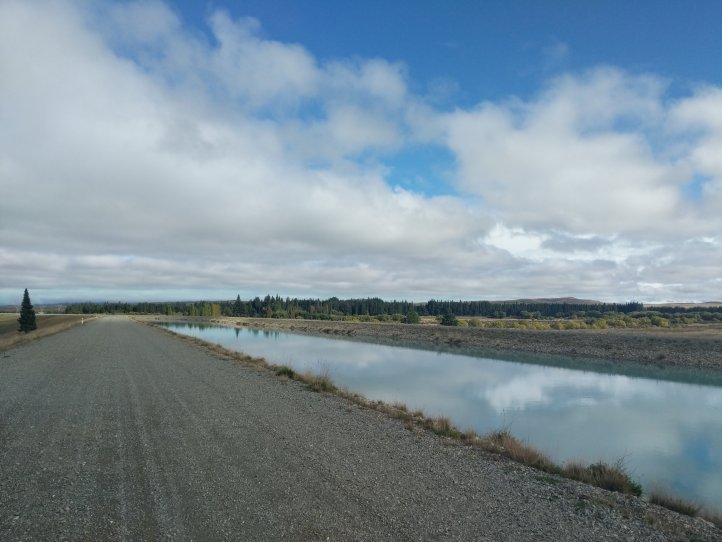 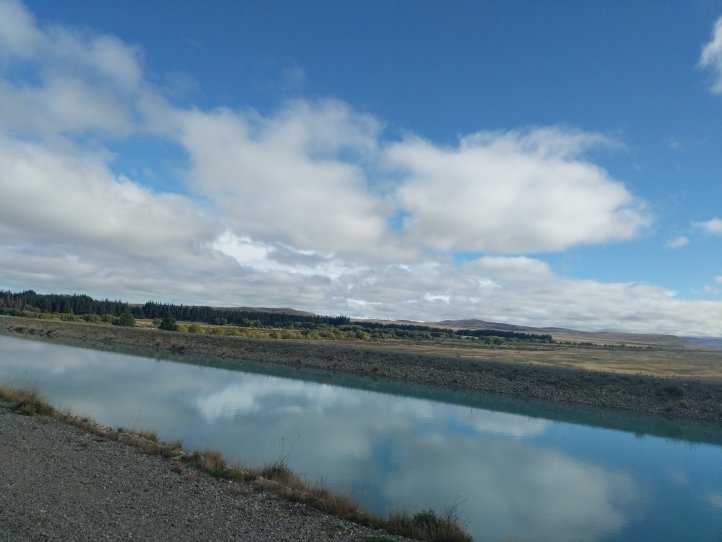 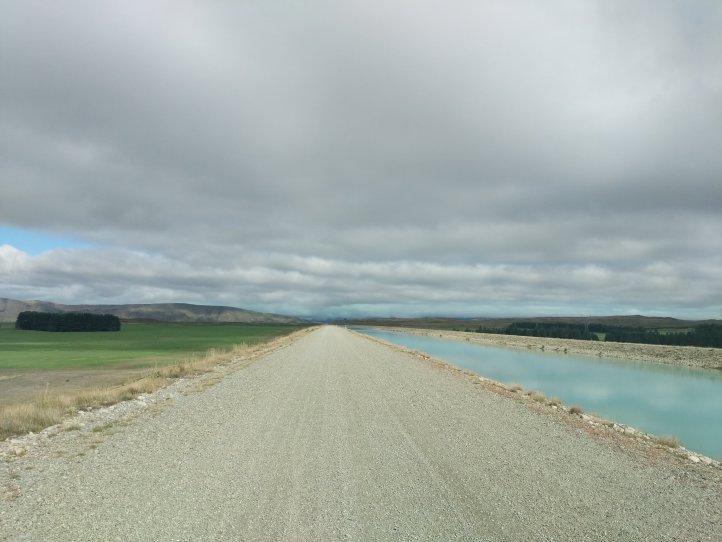 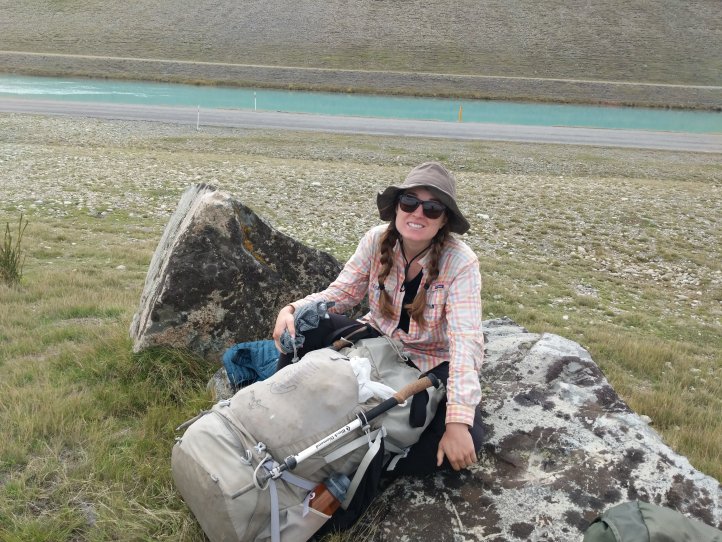 Right after lunch there was a sign for a high wind and low wind route, apparently sometimes this corner got so windy trucks could blow over into the canal. It wasn’t too bad for us and neither of us blew in.

The whole canal route is also a bicycle track and we passed a decent number of people cycling around. One lady we passed had started in the Cape on the same day as us in December (not that we saw her then) and had been biking around New Zealand since. She gave us about have a date cake which we devoured within five minutes of leaving her. 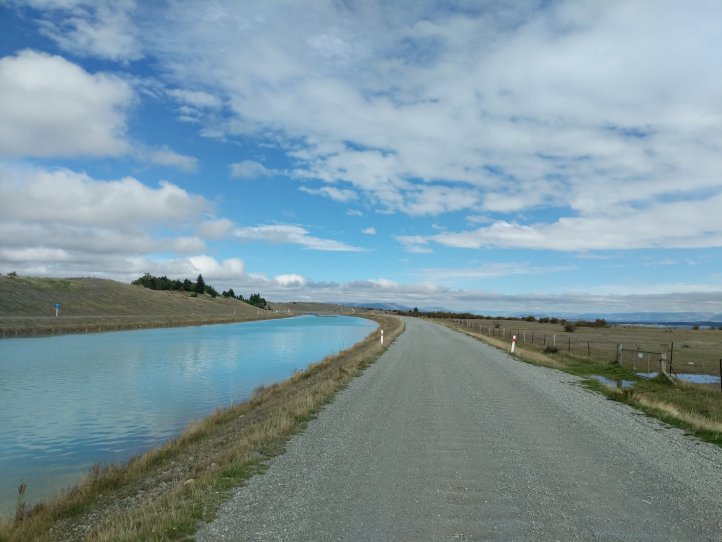 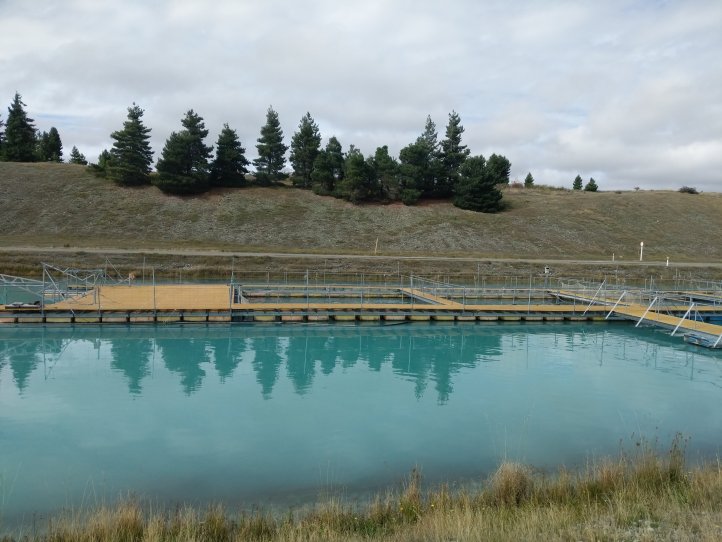 After passing the salmon farm the canal ended and we can into view of Lake Pukaki. There were a couple campervans on the top of a hill at the end of the lake and we realized this was a pretty famous spot for photos of Mt. Cook. There’s even a famous lookout spot on the other side of the lake called Peter’s Lookout. Unfortunately the clouds were in so we still couldn’t see anything. Although we could see enough to know they were still covered in snow. 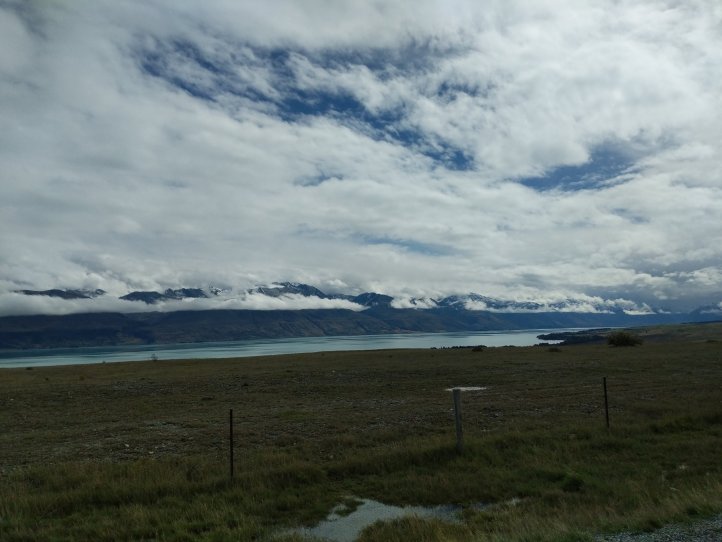 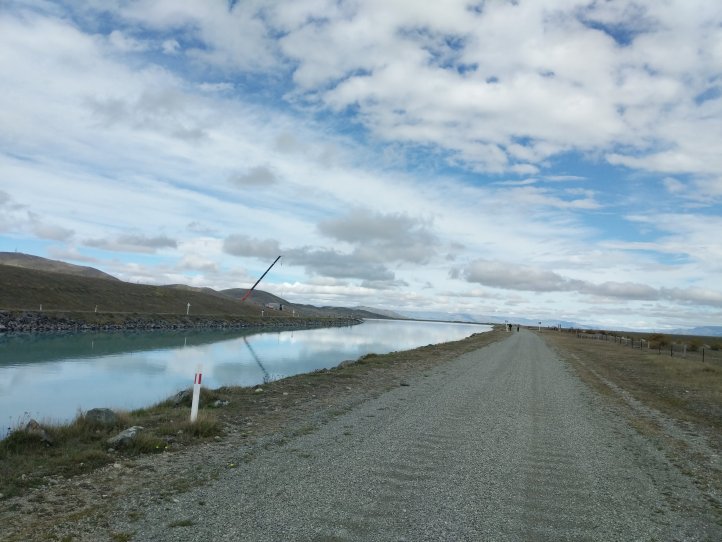 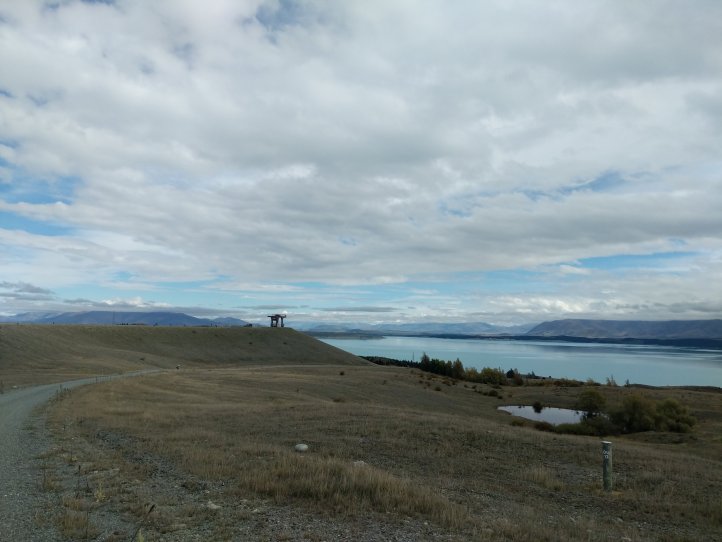 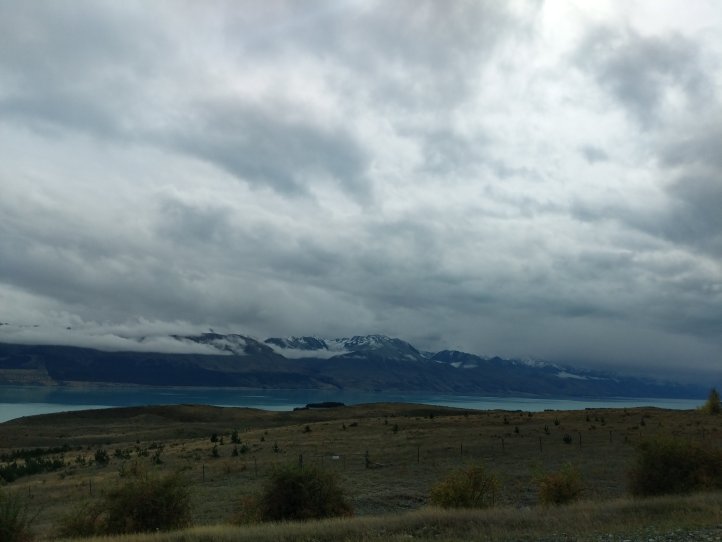 We passed over the pipes for the runoff from the canal and descended down towards the lake and the second power station. From here the trail followed the road along weaving in and out of pine trees on the edge of the lake. In one random piece of chance we saw a Wallaby hopping along above the road. They’re a pest in New Zealand and they’re trying to eradicate them entirely but it was cool and unexpected to see one. 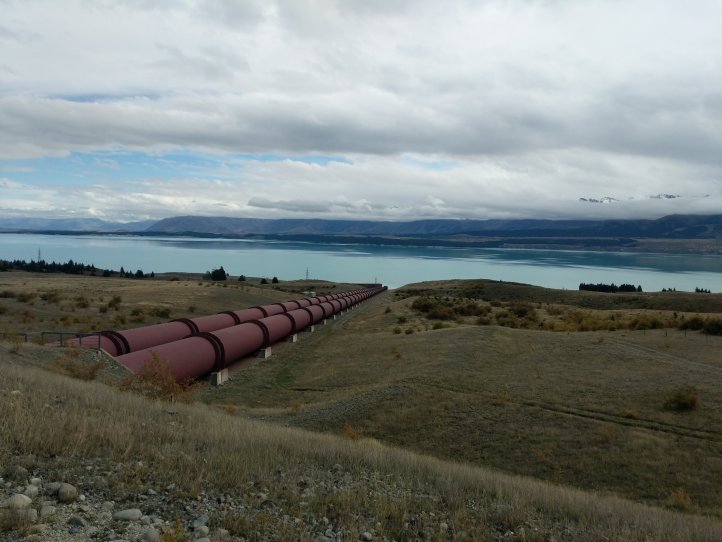 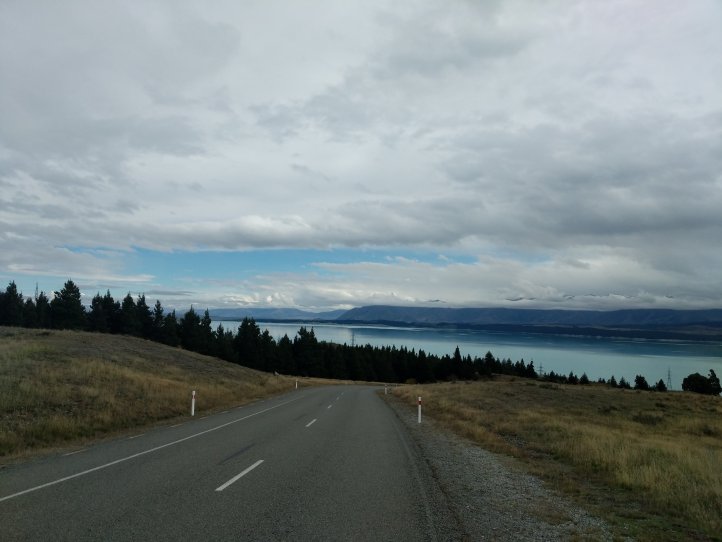 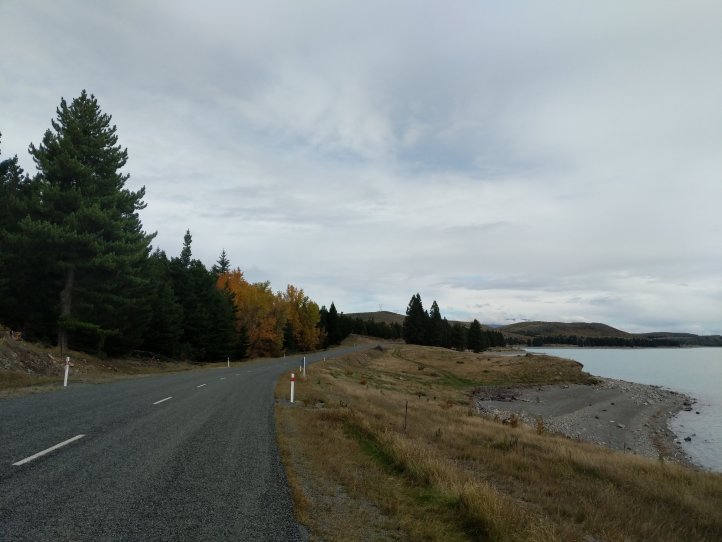 We were being chased by rain clouds at this point and would occasionally feel a raindrop or two so had to put our jackets and pack covers on. For some reason the rain never actually reached us so we didn’t end up getting wet. As we neared the end of the day we realized the spot the notes were recommending for camping was a freedom camping spot that would be packed with obnoxious camper vans and car campers given it was so popular. As we were already in a nice pine spot with great views and a picnic bench we decided to call it quits and just set up here for the night a little early. 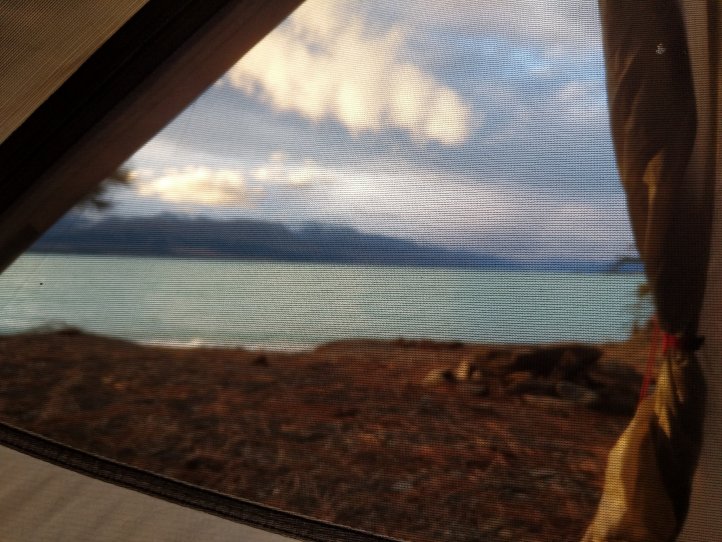 It got really cold really quickly and we were bundled up in our puffy’s and sleeping bags in no time. We had a nice warm dinner of pasta and cheese rolls(!) and avocado(!) before retreating to the tent. We’ve put the rain fly on again finally but mostly just for the warmth.