Still no helicopter last night or this morning so when we left the hunters were stuck needing to stay at the hut not knowing if it would arrive soon or not. They were also out of beer so their situation was getting pretty desperate. I promised to try and call the helicopter company once we reached the ridge line later in the day. We set out down the 4WD track which after 20 minutes led to the start of the forest and the river valley. 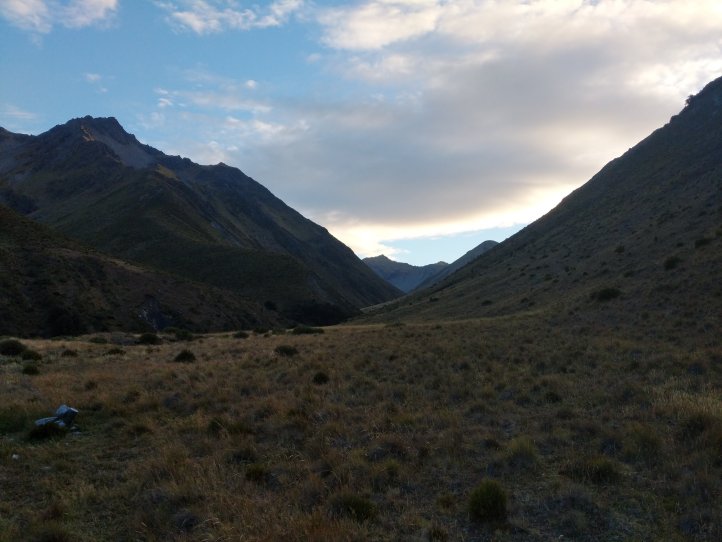 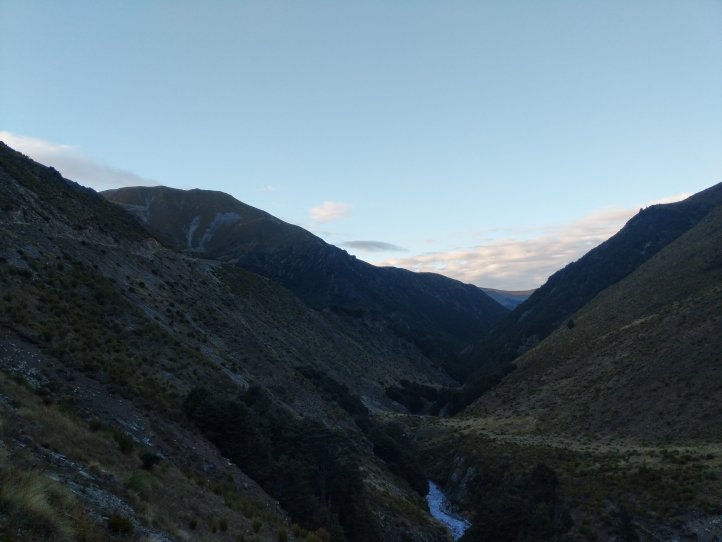 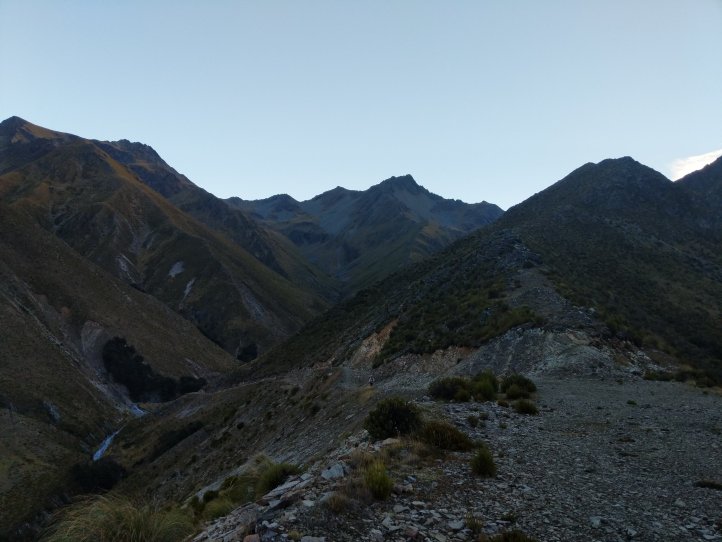 We near immediately started to descend down to the river and quickly had our first of many river crossings. 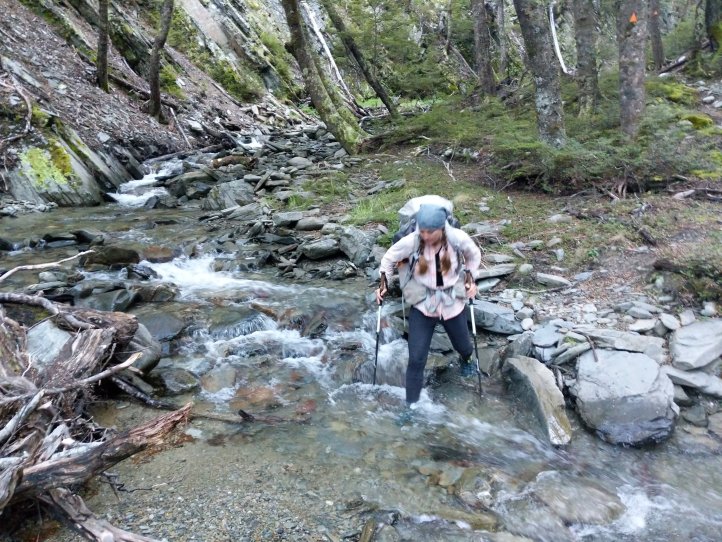 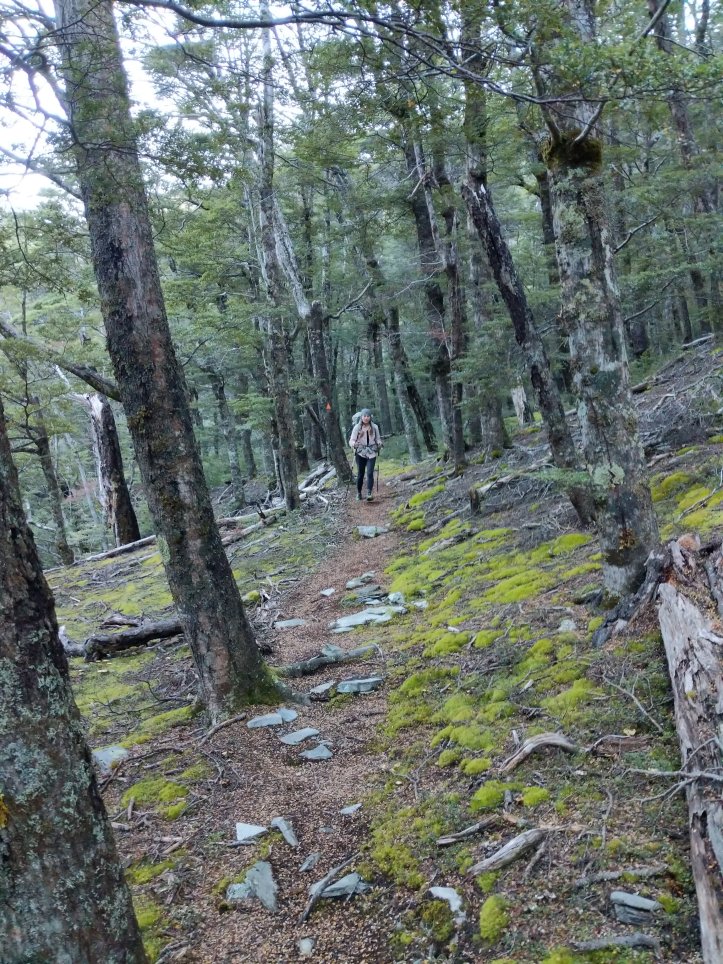 The track was much slower than we anticipated with plenty of up and down and siddling along on scree ledges over the river. It was an enjoyable walk and was nice to be back in forest but after a few hours started to feel pretty tough. 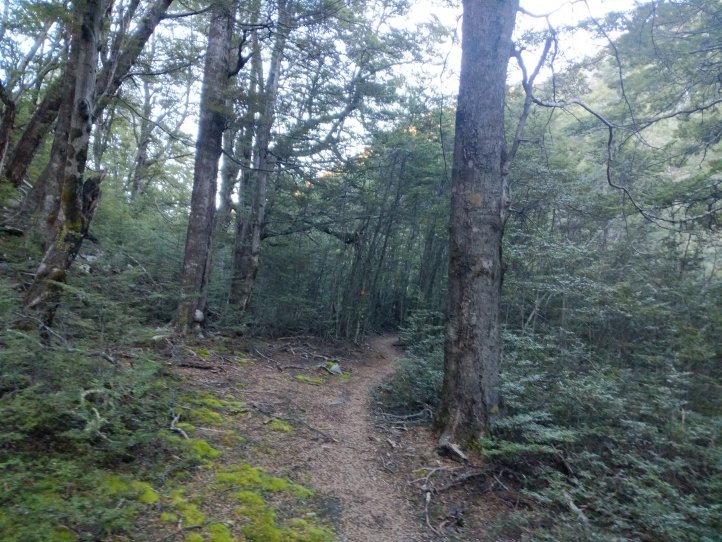 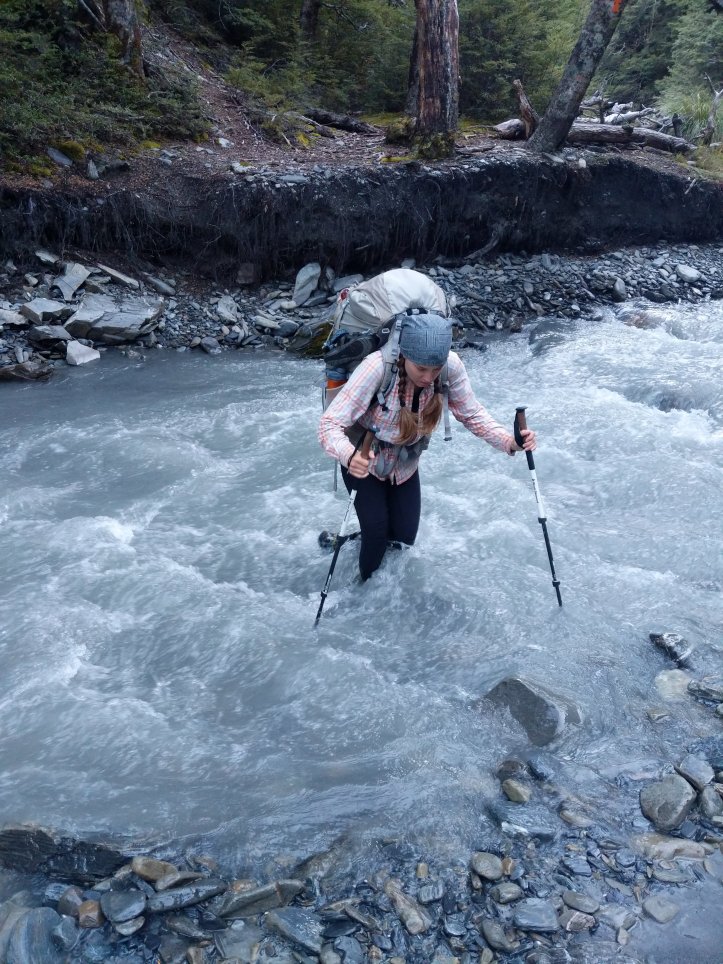 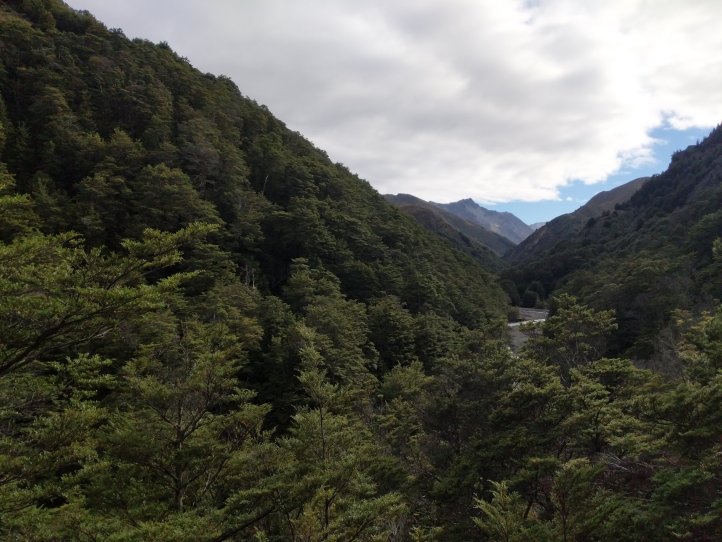 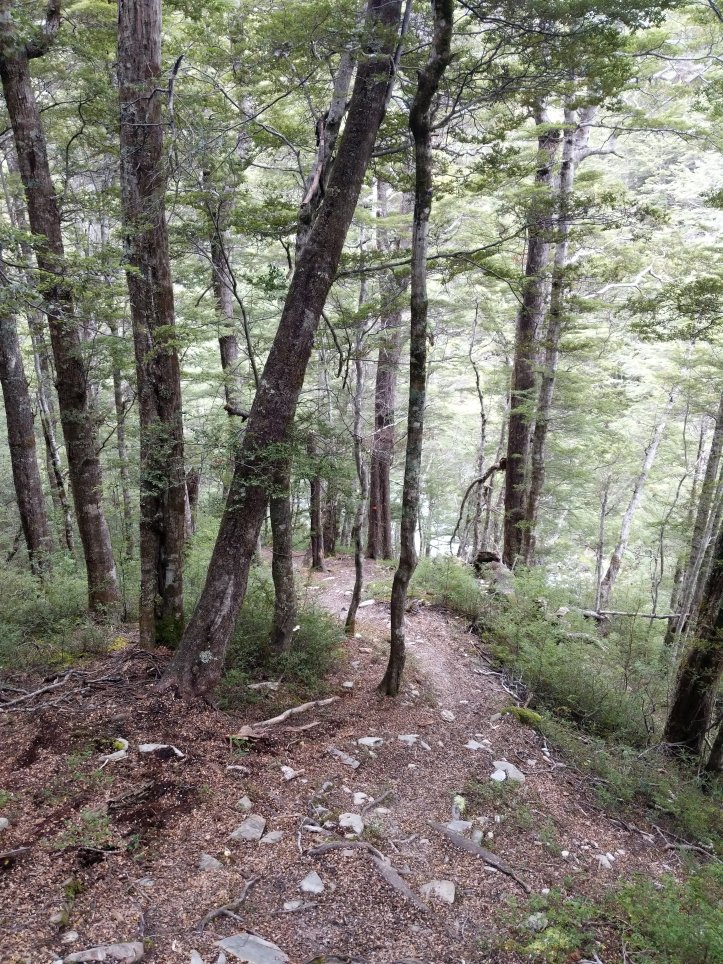 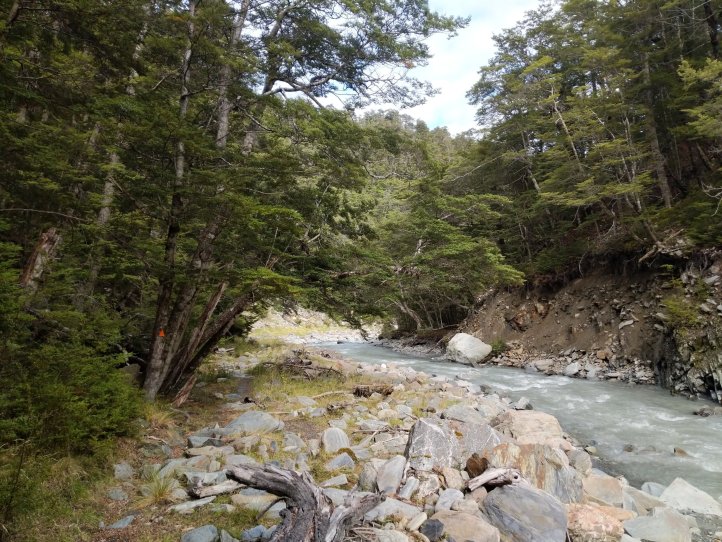 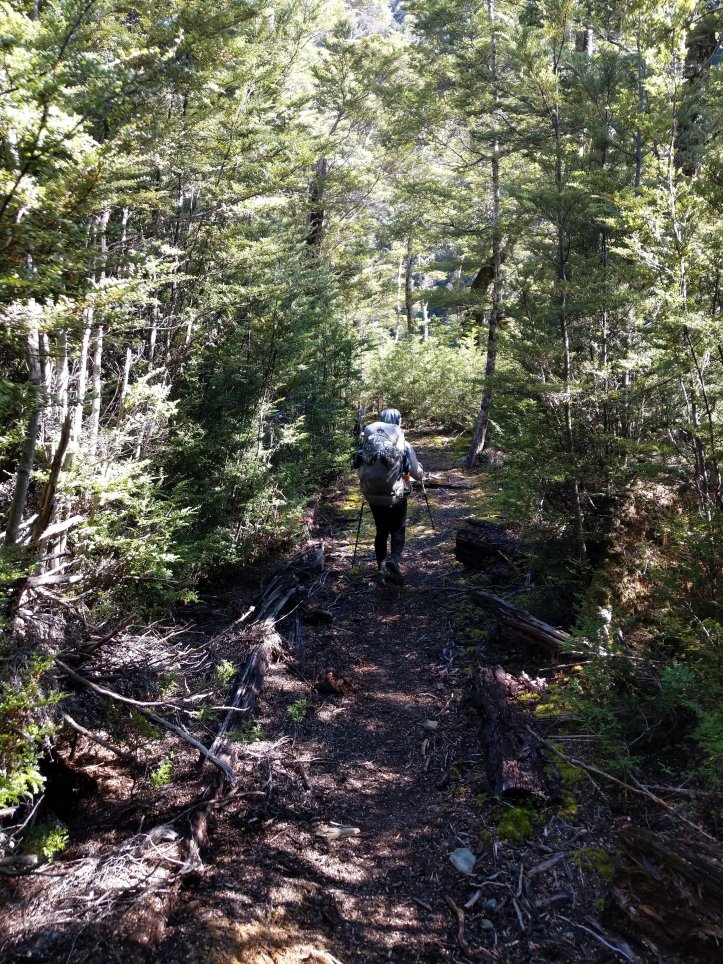 We broke for lunch feeling a little disheartened that we hadn’t made it as far as we wanted yet. After lunch we had some more hairy sections including a pretty dramatic fall for me. Thankfully nothing was to injured although plenty of scrapes and a big bump on my shin. I also managed to avoid landing in the river luckily. We hit the trail head and start of the climb to Stody’s hut another hour after lunch. 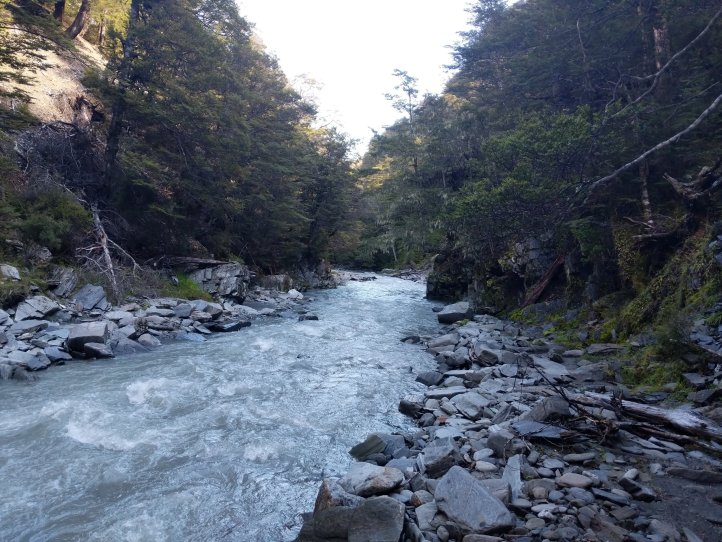 The climb was only 2km but it was a near vertical ascent and took us an hour and a half to reach the hut at the top. It was a clear blue day and we were getting some great views that were starting to get us excited for the ridgeline coming up. In the hut book someone had made the comment “if a goat walks up a hill does that make it a trail?” which we thought was very appropriate for the vertical face we’d just climbed. 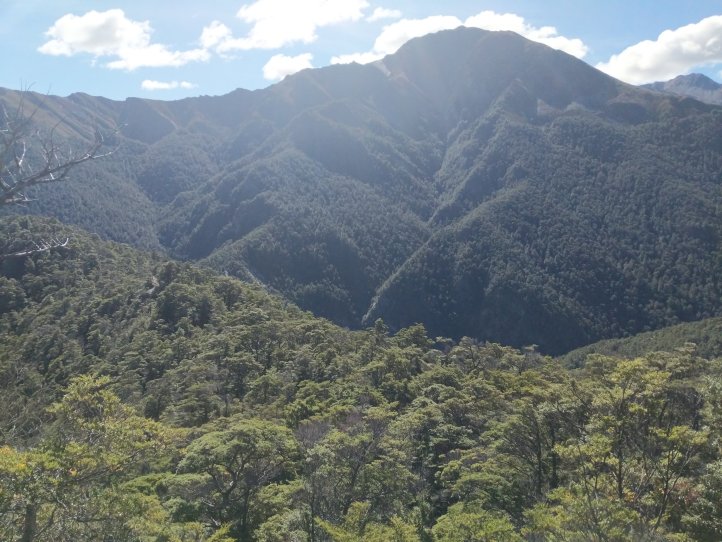 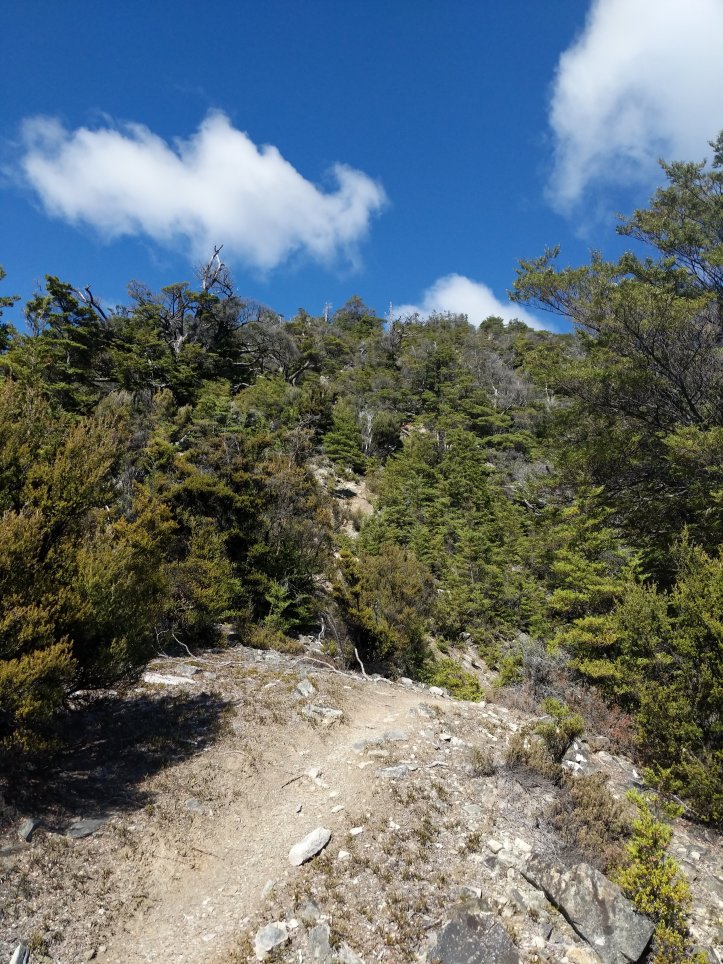 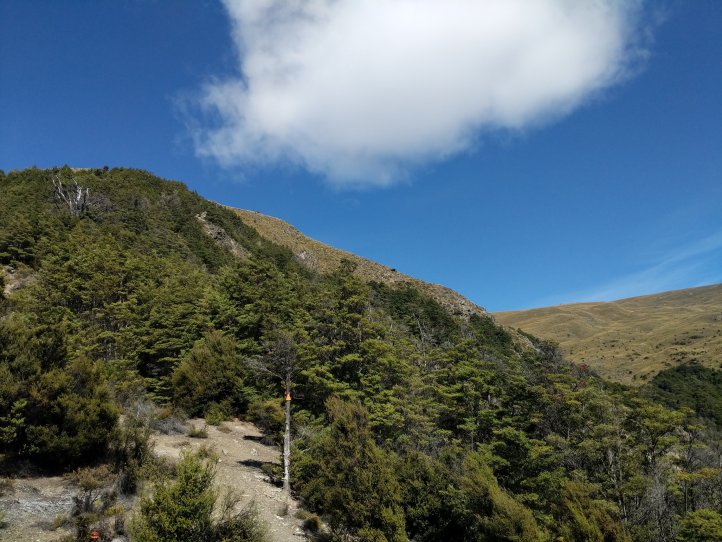 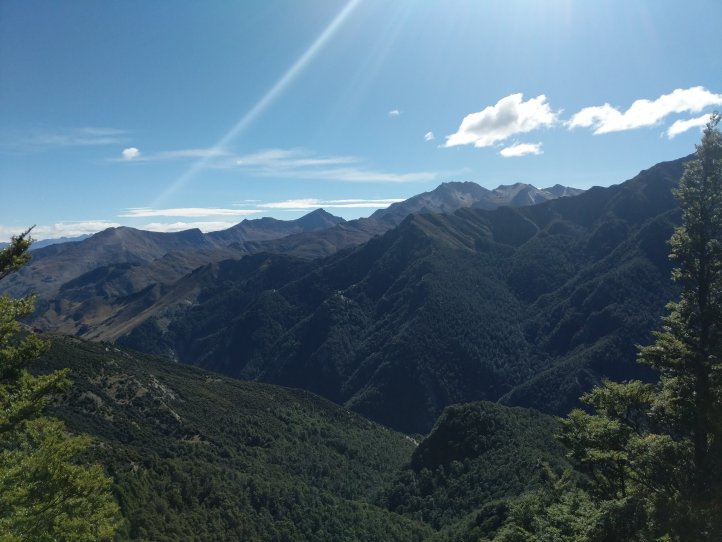 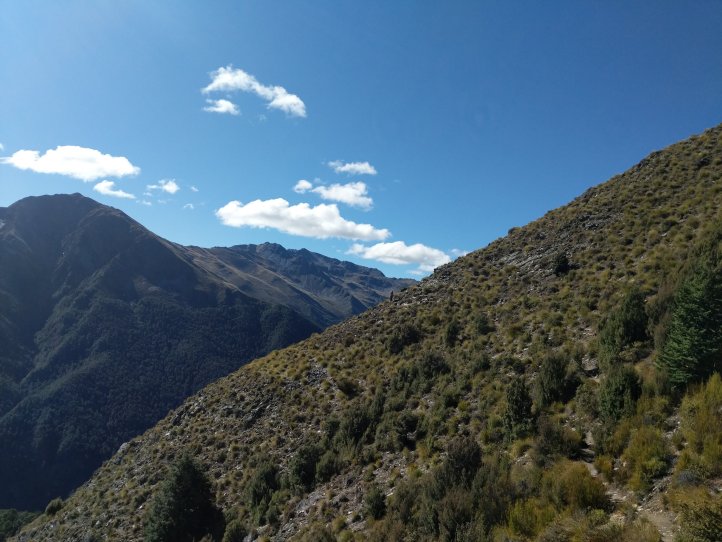 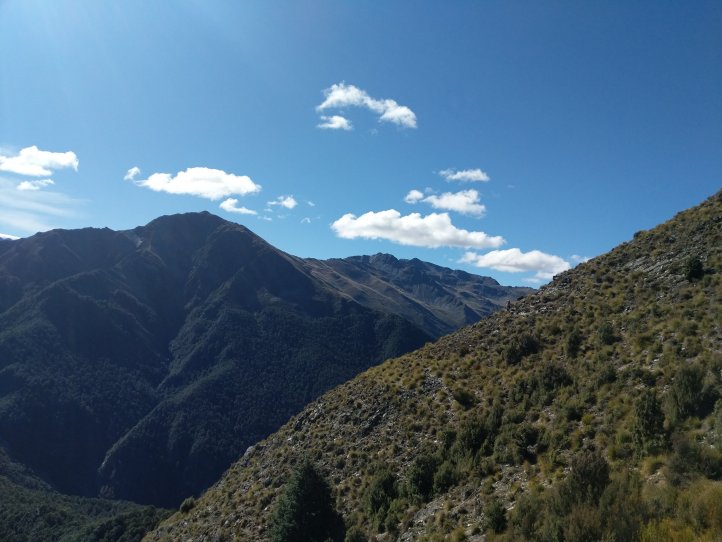 Beyond the hut the trail turned into farm track and continued to climb up to the ridgeline. It was a long but steady climb and we had fantastic views all around us. 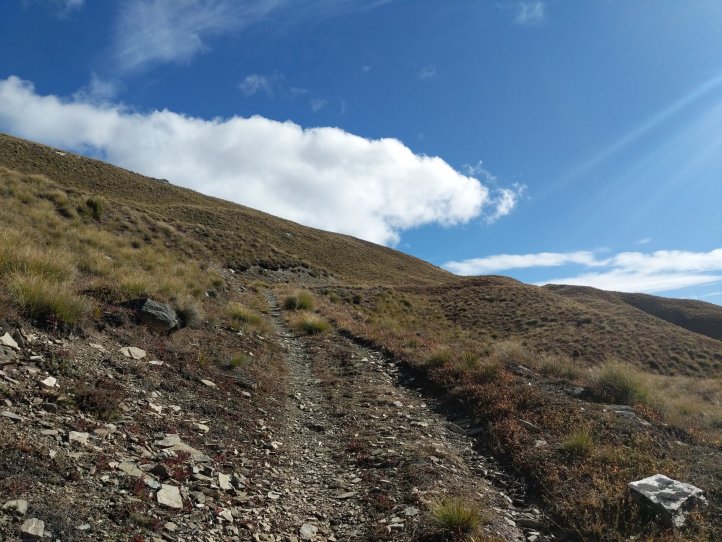 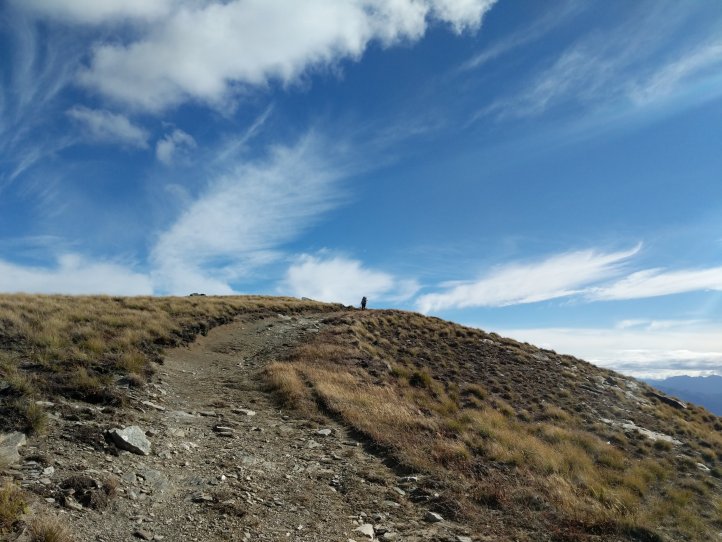 We knew from the top of the final summit we’d be looking right over Lake Hawea and Wanaka in the distance and by now we were getting a couple planes flying over us doing some practice for the Warbirds Over Wanaka airshow which starts tomorrow. This track was much longer than it seemed just by looking at it but we were still able to reach Breast Hill summit in two hours. 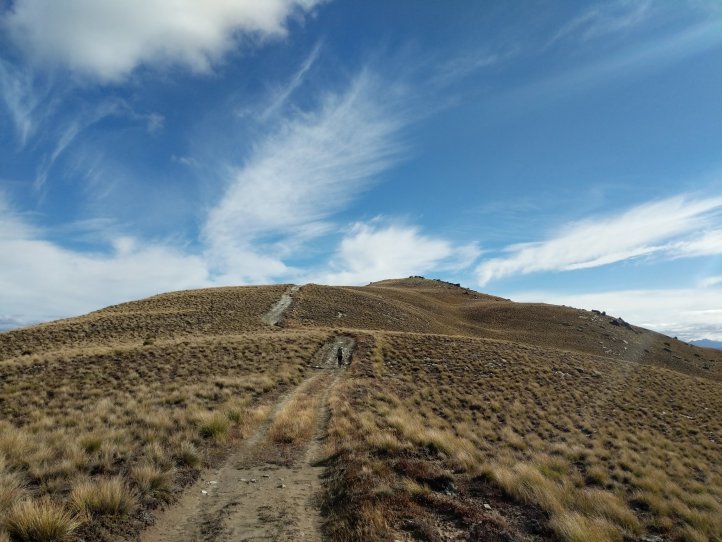 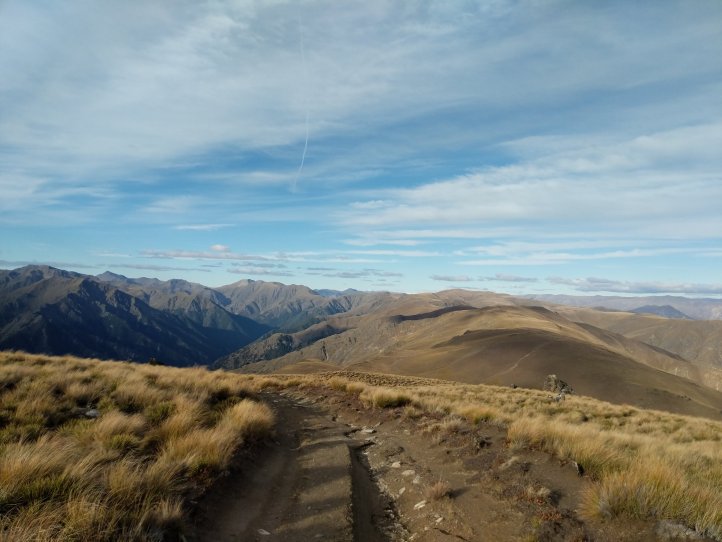 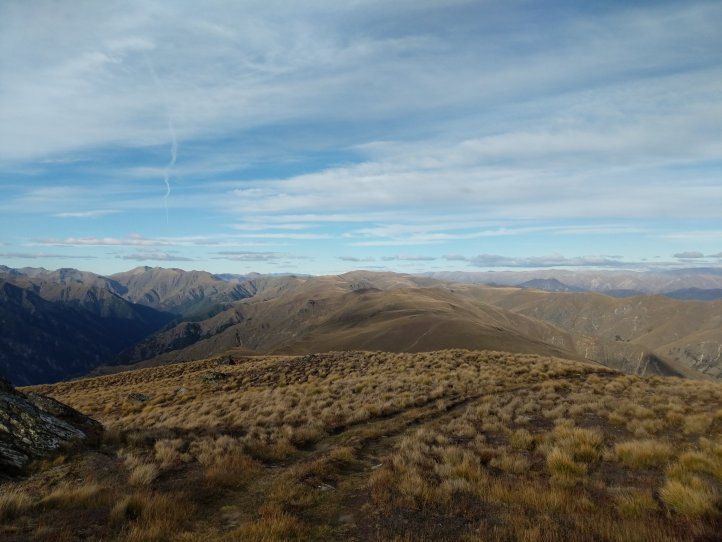 The view from the summit was spectacular and we enjoyed sitting on the rocks for a few minutes soaking it all in. With the upcoming break in Wanaka this was definitely a highlight to sit here knowing we’d be down there relaxing tomorrow. There was another person camping at the top for the night and we briefly chatted with her before setting off down to the hut. 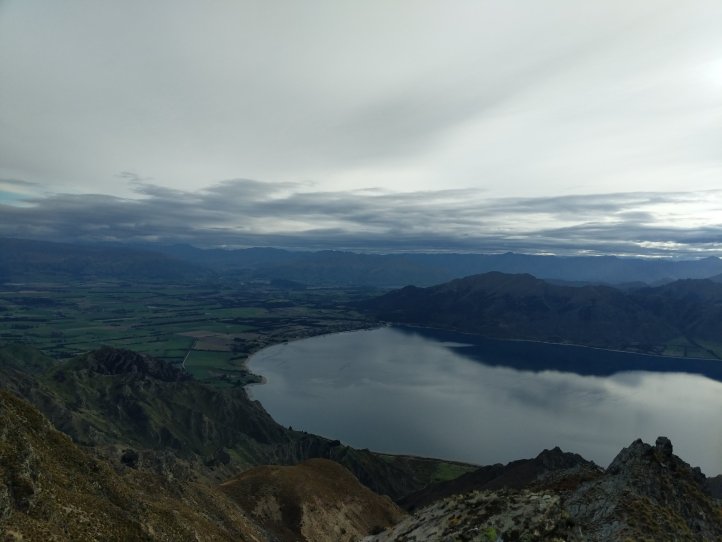 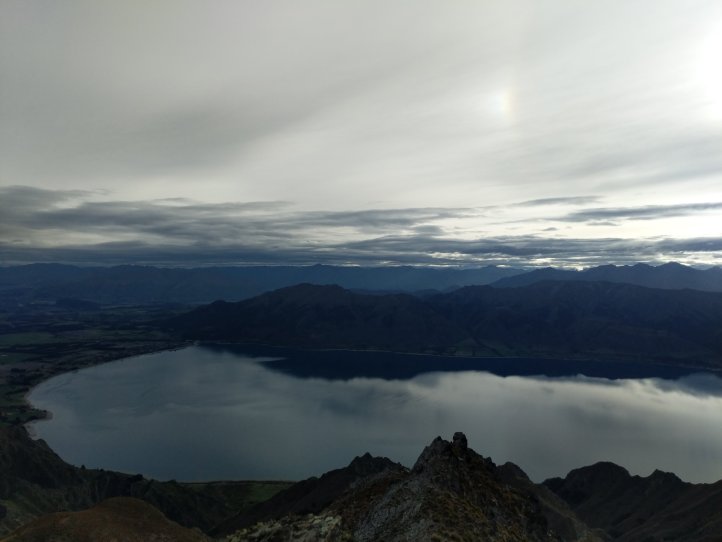 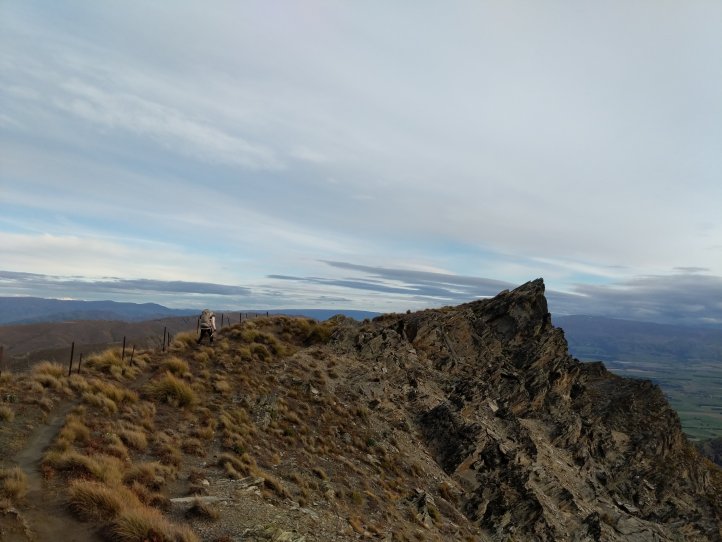 It was an easy 2km downhill to the hut just following a fence line all the way. It kept us on the ridge so we had good views the whole time too. The hut is a great little 8 bunk place that’s newly built (2011). We had it to ourselves for about an hour until our loud French friend stumbled in later. We set up the bottom shelf of bunks such that there’d be no risk he’d try and share with us and thankfully he didn’t. We’ll get n early start with sunrise tomorrow to get to town with as much time as possible. We’ll be arriving with no food but not starving hungry (at least beyond our usual amount) which always makes us happy. 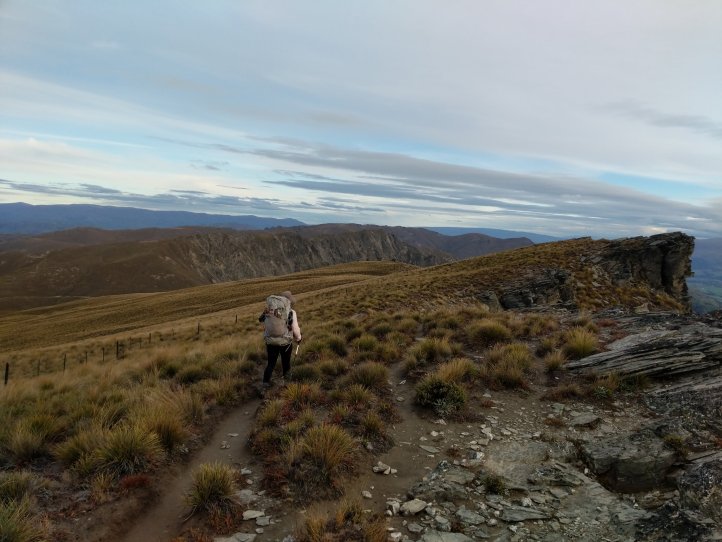 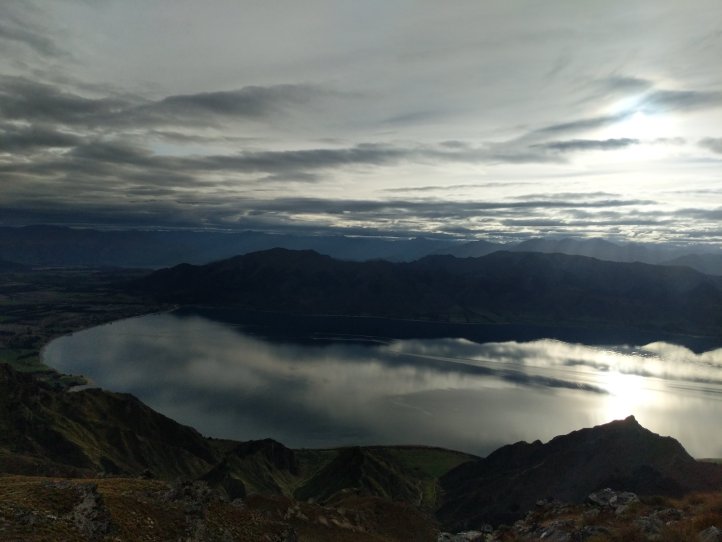 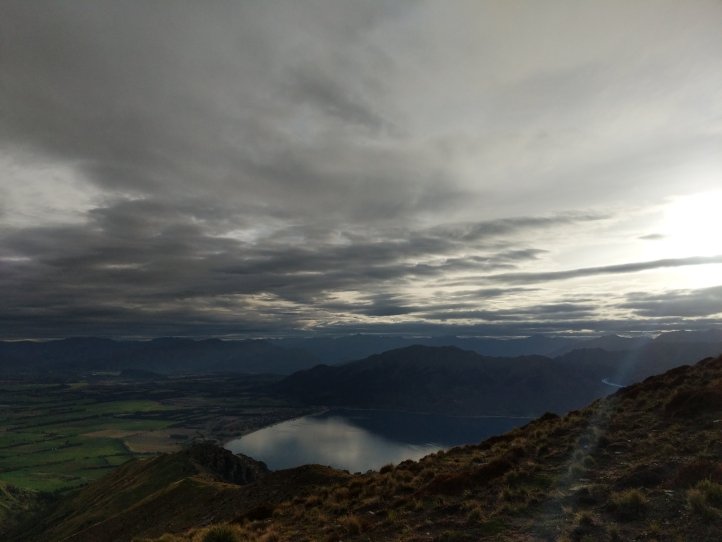