As we were falling asleep last night we heard cows mooing in the distance. We were too tired to care but fully expected to wake up surrounded by cows. Thankfully we didn’t but it was a very cold morning. We laid in a little bit more than usual to allow the sun to come up and warm us but still started out hiking in our puffy’s.

The first 5km was on alongside the mountains on a farm track. This was fairly easy with the exception of a few stream crossings that we were able to jump and running into a number of cows. They seemed to congregate on the path as they saw us coming and then lightly jog ahead of us. 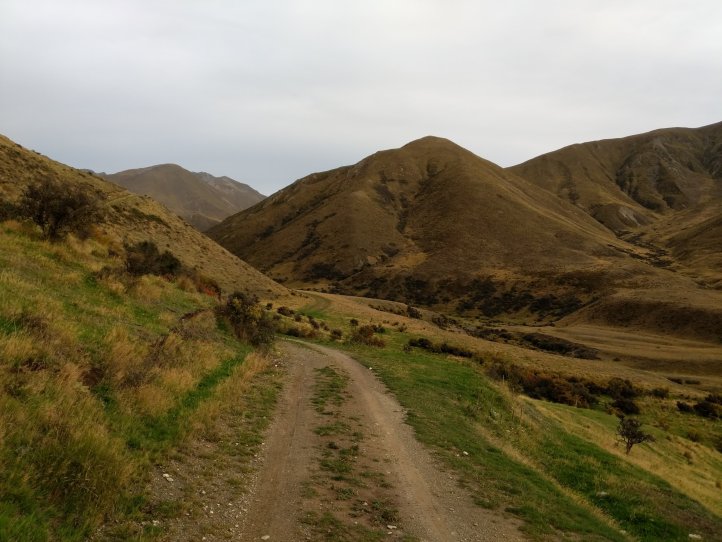 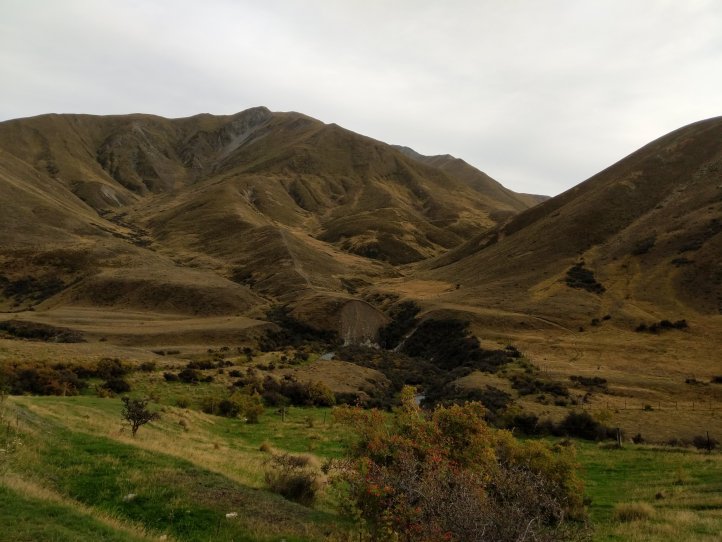 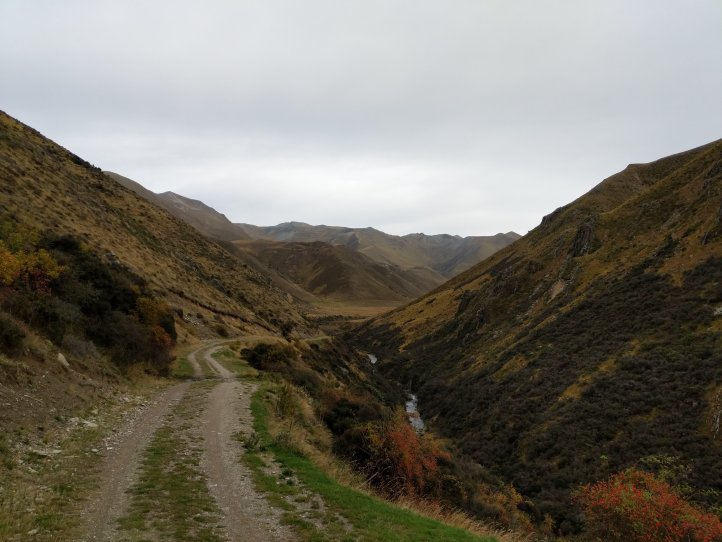 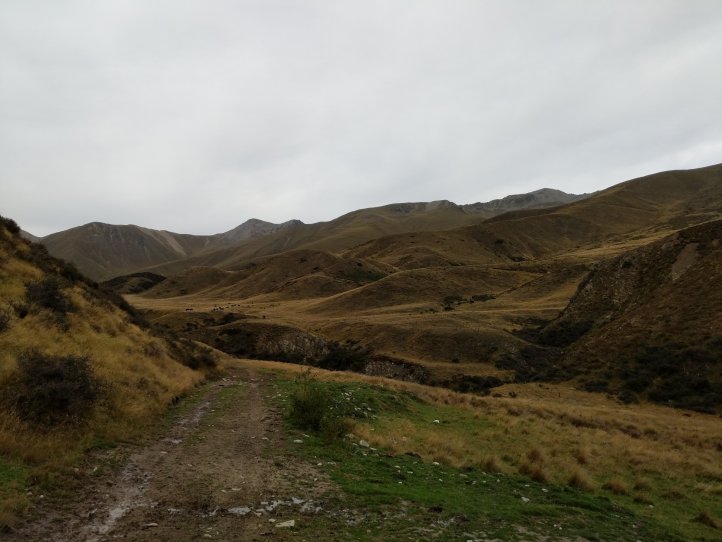 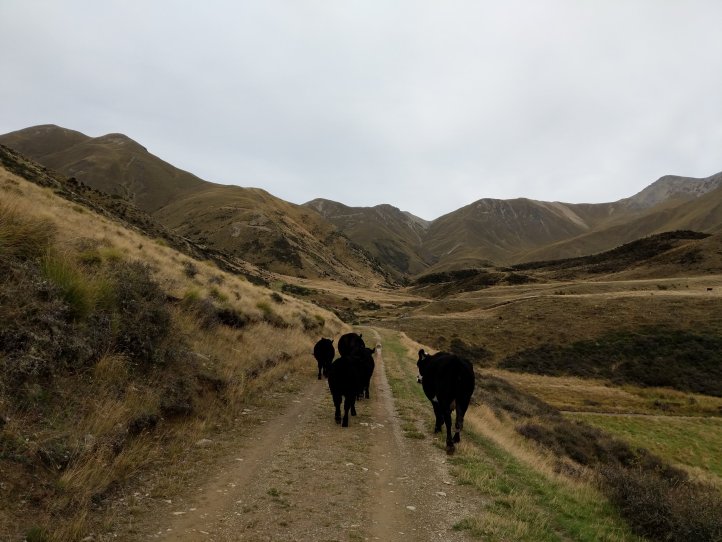 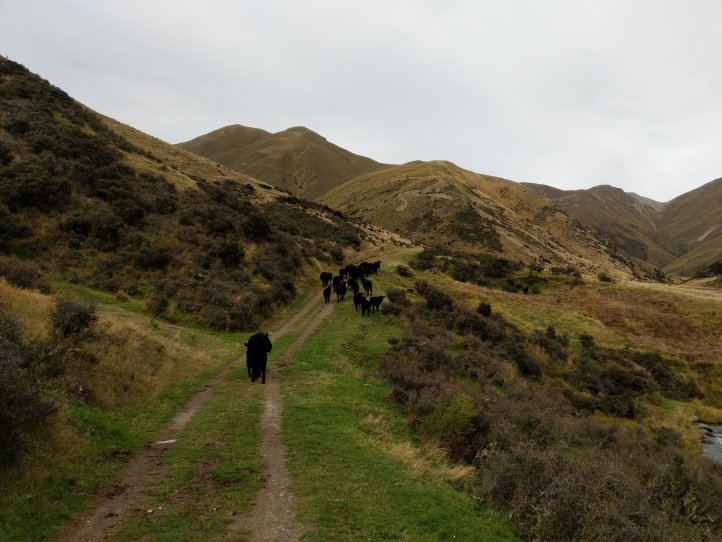 We eventually cleared through a gate and managed to escape although discovered that while devoid of cows the next field was full of their leftovers. We walked another km to a nice but very old private hut with graffiti scratched into the side dating back to musterers from the 40’s. 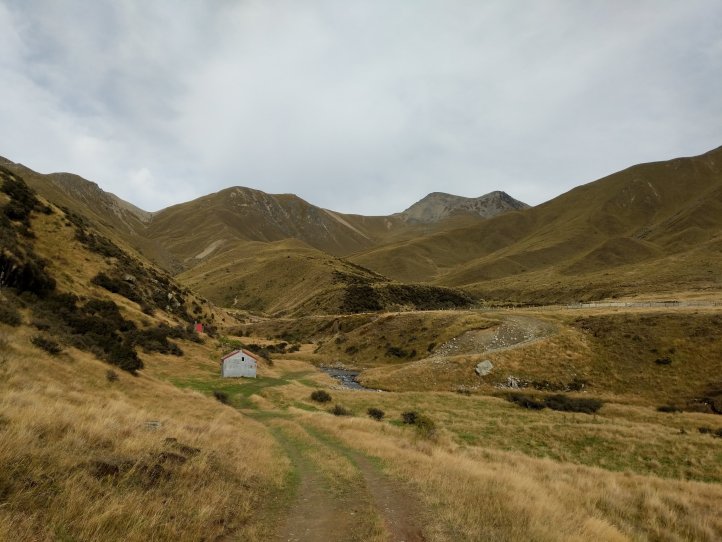 From here it was across a stream just wide enough to not be able to stay dry and then beginning our climb up to the saddle. This saddle was at 1680m so not very far off the highest point on the trail and we were worried that we might see snow. Thankfully it didn’t look like there was any and the day was sunny and clear as we climbed. The climb was pretty straightforward with a reasonable farm road all the way to the top. We had great views the whole time. 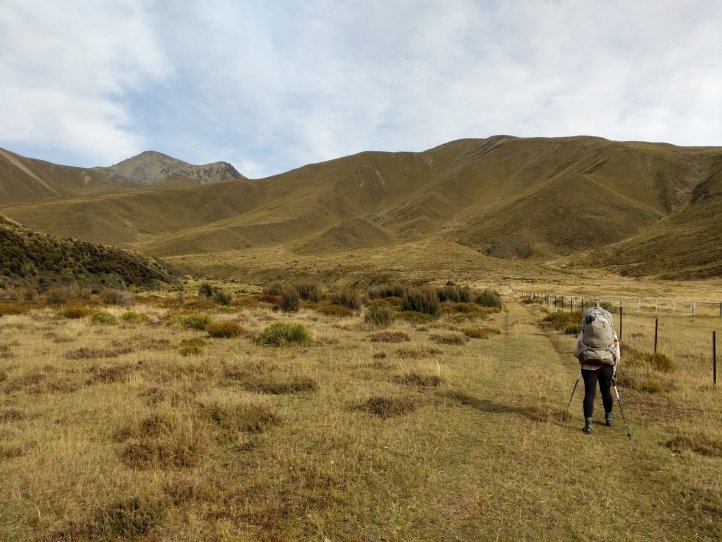 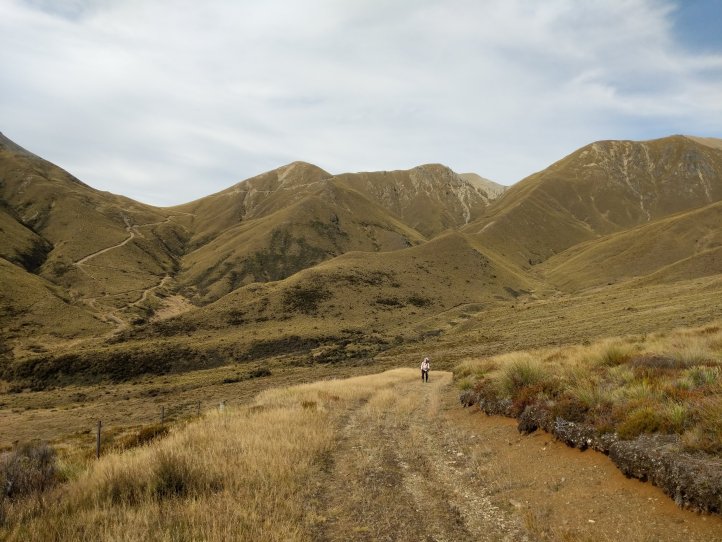 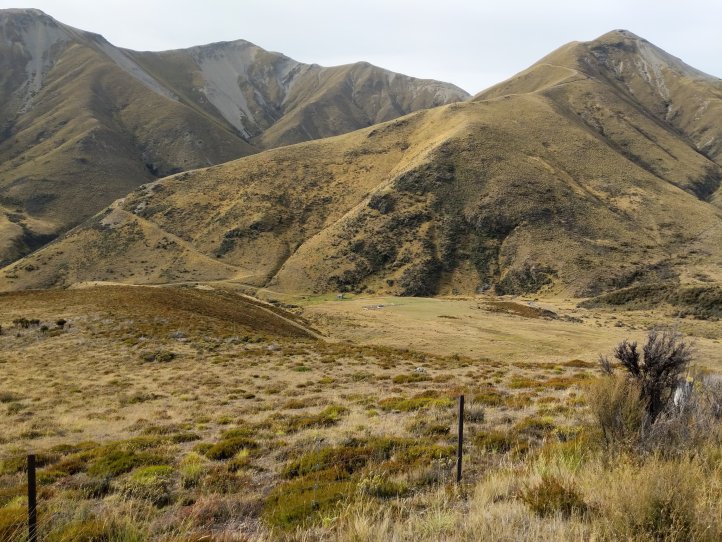 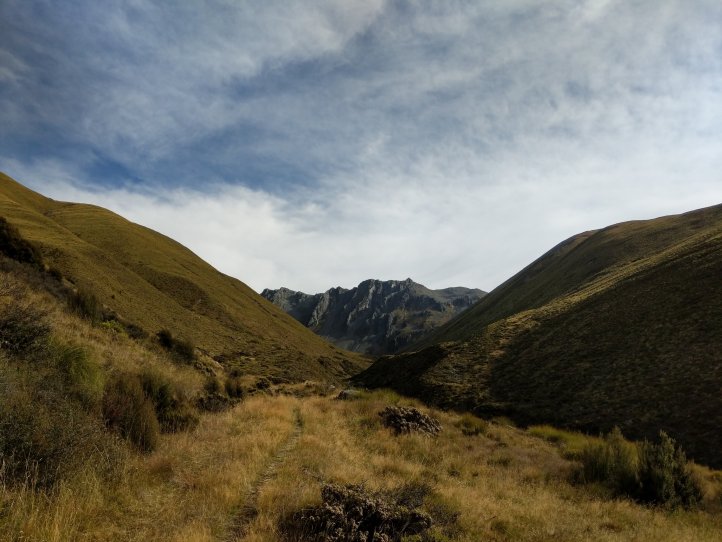 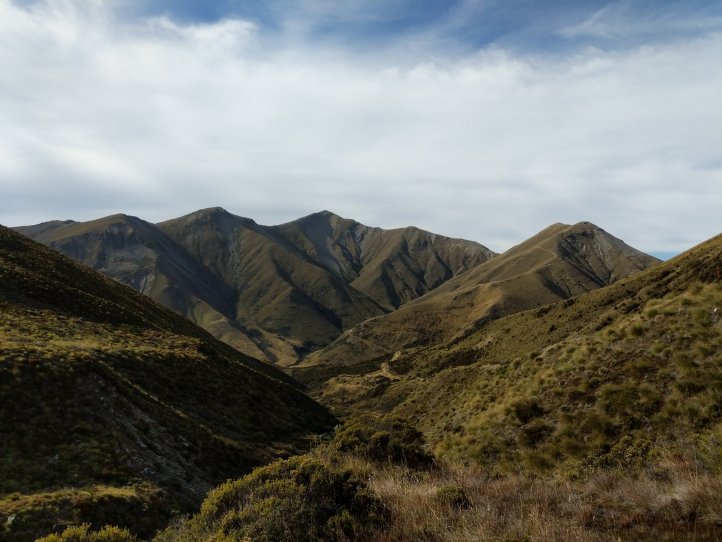 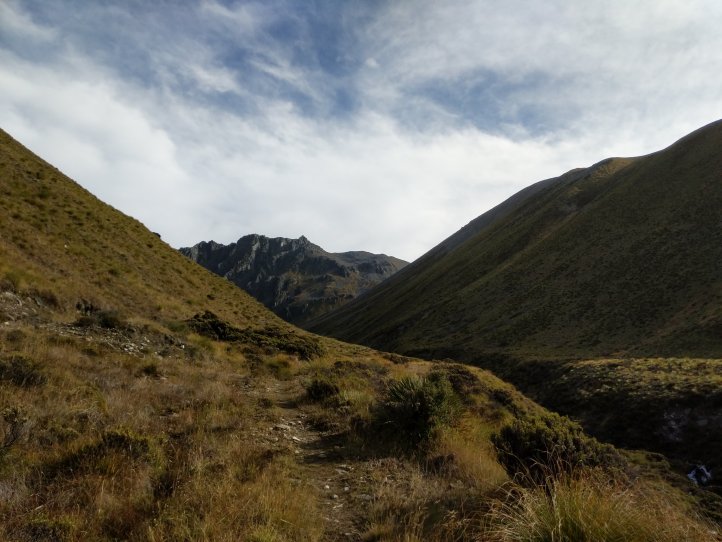 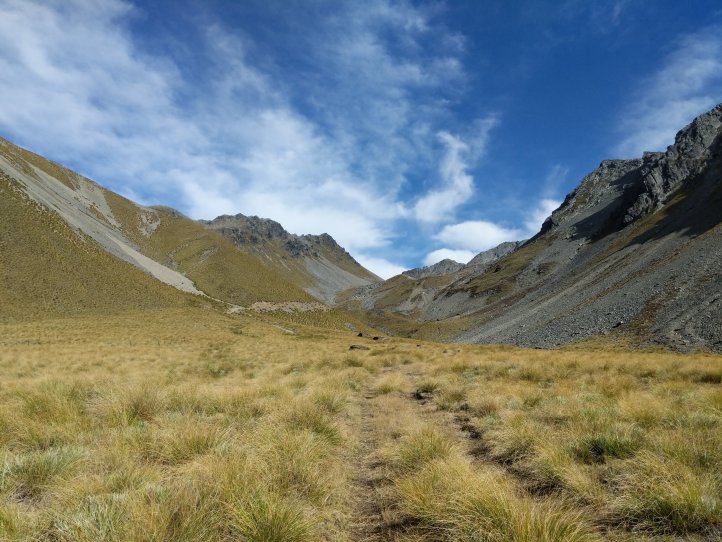 The final stretch was a bit steeper and more gravely but we made it to the top in about two hours. We stopped for lunch at the top to enjoy the views and soak in the sun. There was a sign saying it was only 2 hours to the next hut where we intended to stay so we were able to take it quite slow. 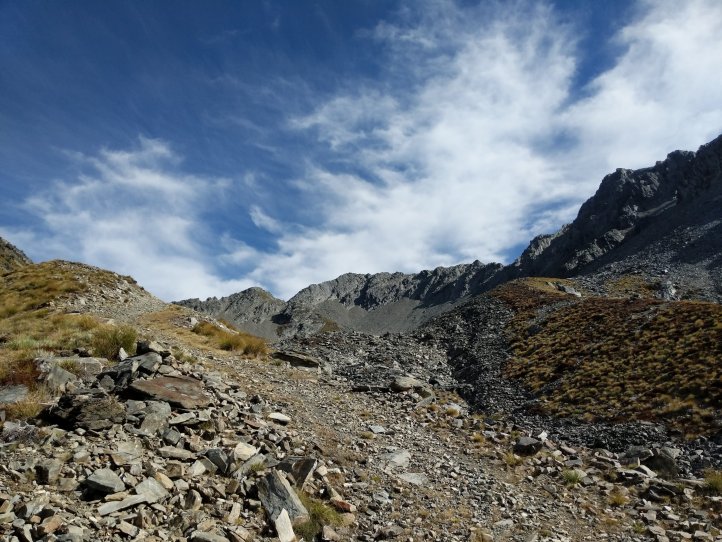 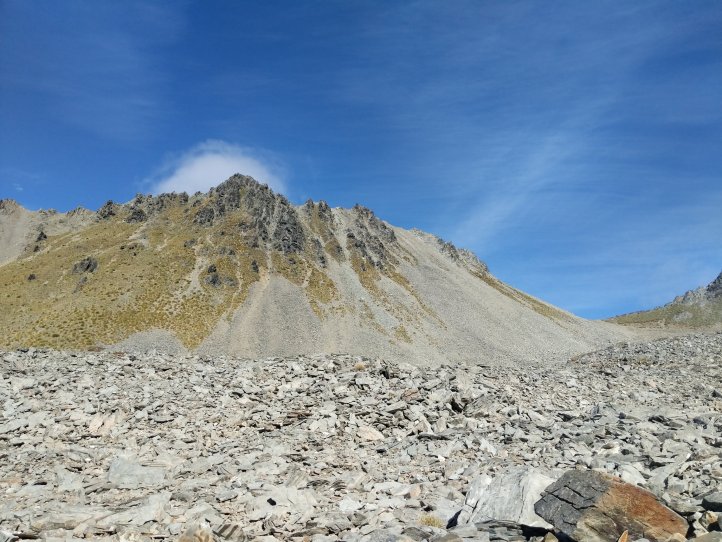 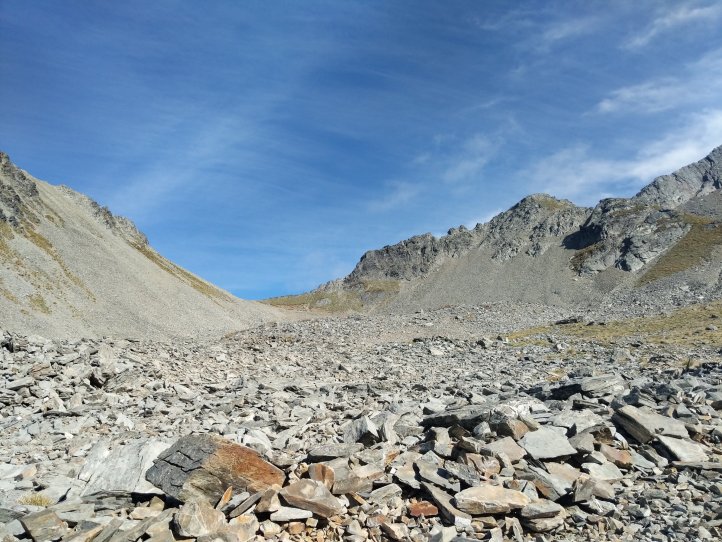 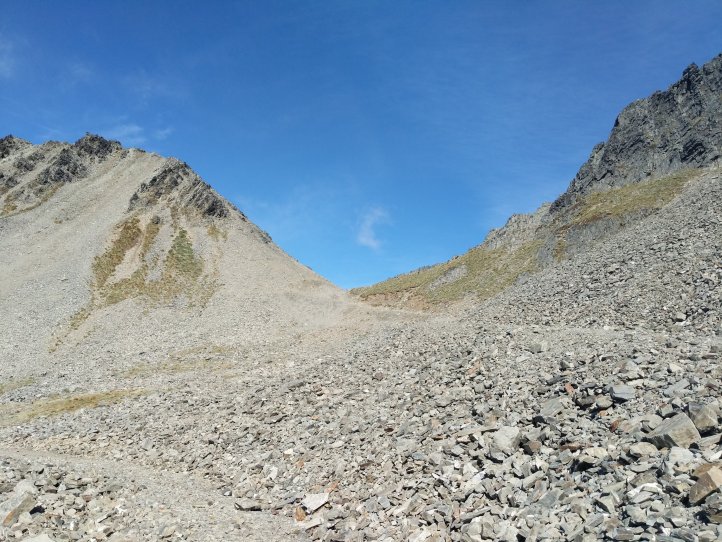 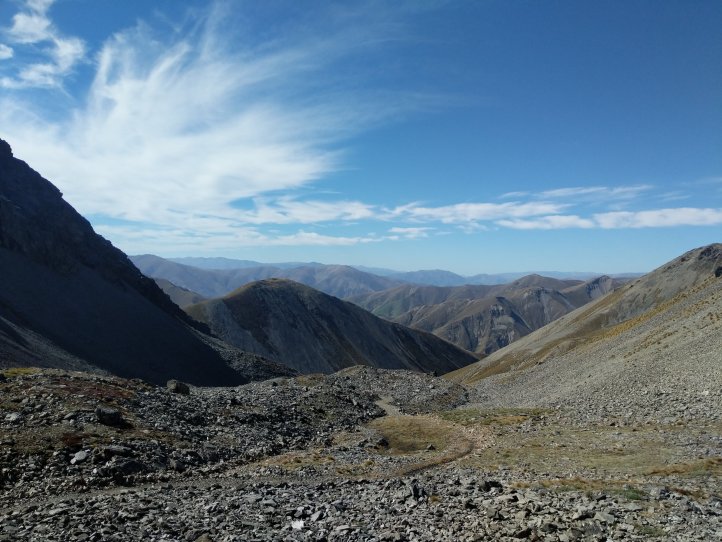 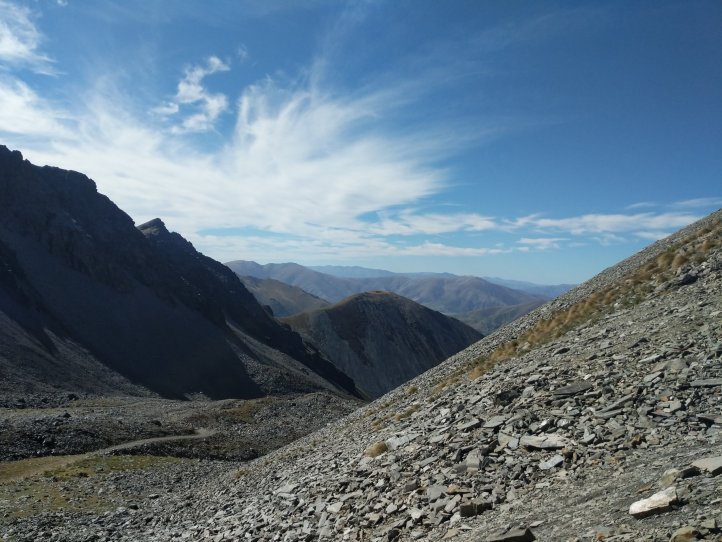 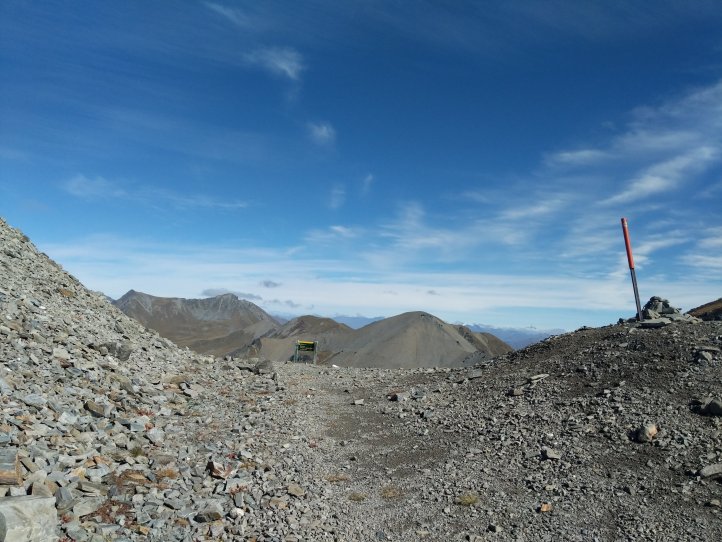 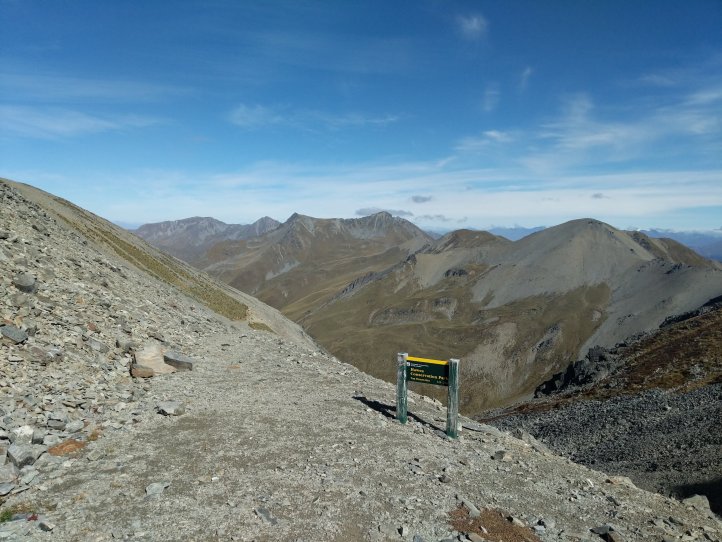 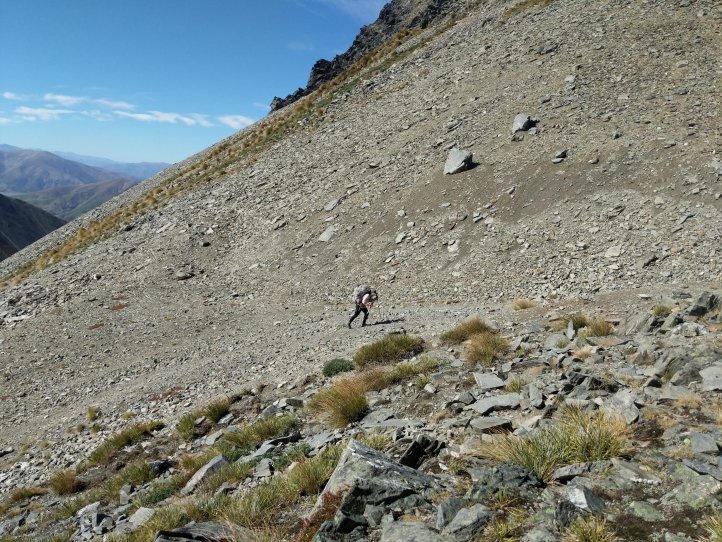 The climb down was pretty easy with the same track continuing on. It was a steeper rocky descent to start that evened out as we got closer to the valley floor and river. 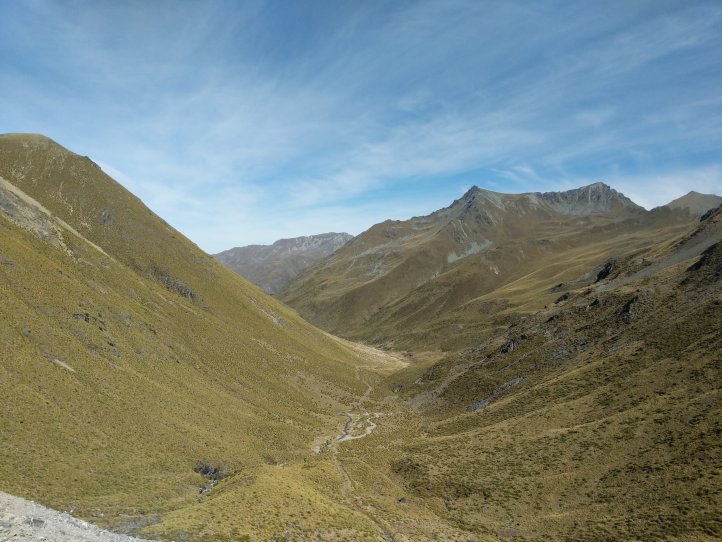 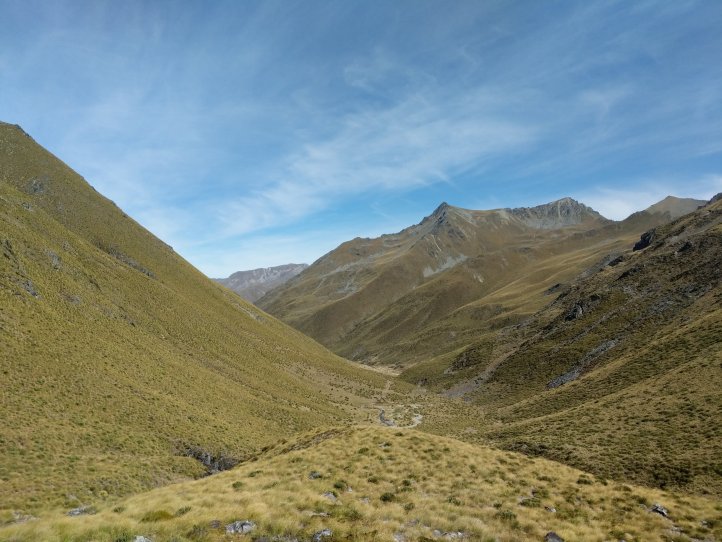 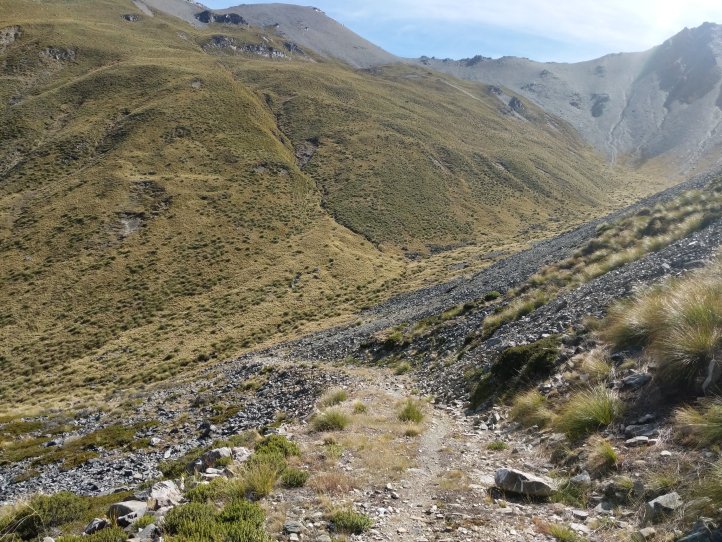 We only had another 5km along the valley floor to the hut and completed this by early afternoon. We thought about pushing on ahead of this but it wouldn’t have really given us a whole lot in terms of getting ahead. The hut was also quite nice even though it was only a 6 person and we were the 4th and 5th to arrive. We spent the afternoon relaxing and chatting with another hiker and two hunters staying here. They even have beer that they’ve shared with us which is pretty incredible. Apparently they were having no luck hunting and had asked if they could send a text for a chopper ride from the GPS. Unfortunately they got no response as I’d have loved to see a helicopter come in and land and what’s even more is they would’ve left us all their extra food. 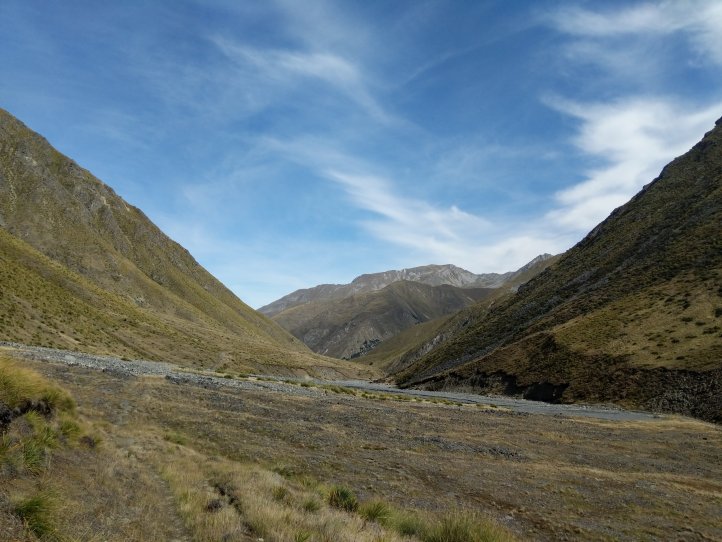 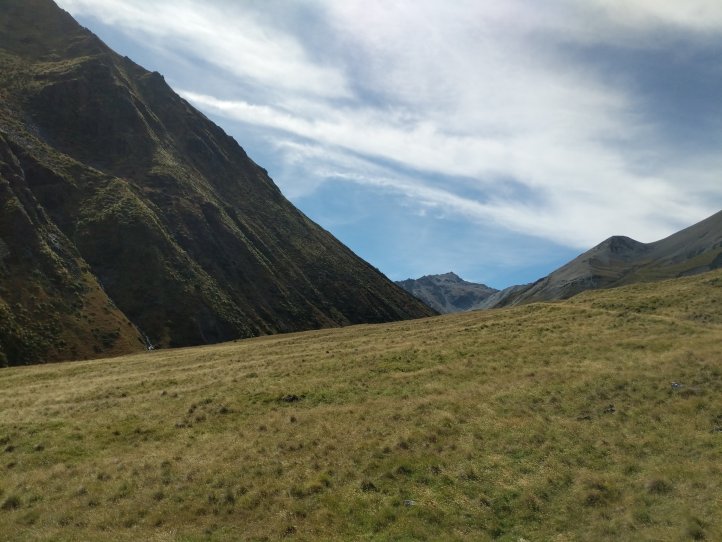 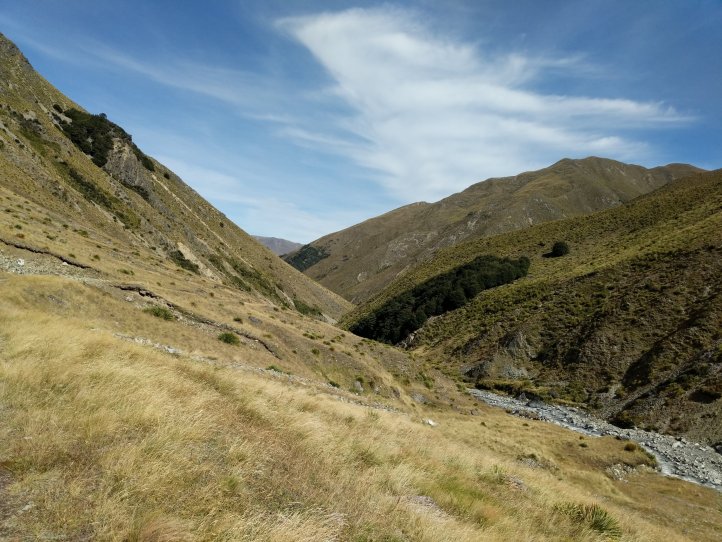 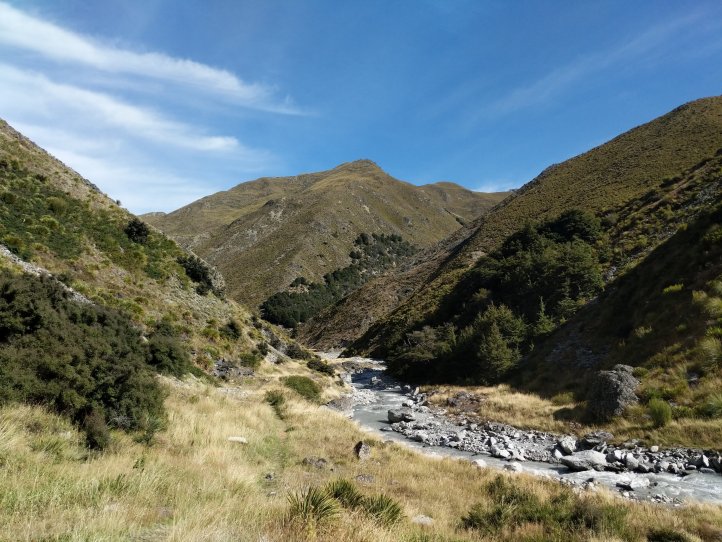